WASHINGTON, D.C. -- Texas, Arkansas, Mississippi, Florida, and Louisiana are the states with the highest percentage of uninsured adult residents, but Arkansas is the only one of the five that has chosen to expand Medicaid and to set up its own state exchange in the health insurance marketplace. Of the 12 states with the highest uninsured rates, eight have thus far decided not to expand Medicaid or establish state-based exchanges. 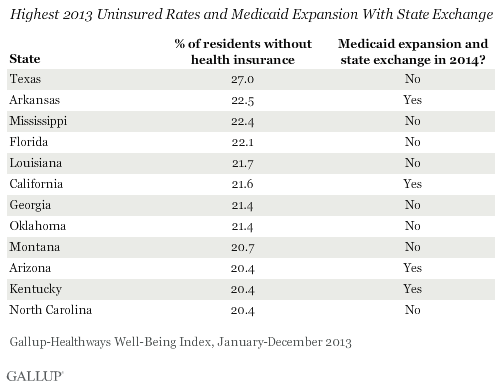 Nationally, 17.3% of U.S. adults reported being without health insurance in 2013, a percentage that has slowly increased from 14.8% in 2008. These data, collected as part of the Gallup-Healthways Well-Being Index, are based on respondents' self-reports of health insurance status based on the question, "Do you have health insurance coverage?"

Some states have chosen to implement state-federal "partnership" exchanges. For purposes of this analysis, these partnerships are counted along with the state exchanges. Only two states, North Dakota and New Jersey, have decided to expand Medicaid without also administering a state-based exchange, while several others continue to debate its expansion.

In contrast to the states with the highest rates of uninsured residents, the 11 states with the lowest percentage of uninsured are considerably more likely to have already approved Medicaid expansion and state exchanges. All five states with an uninsured rate below 10% -- Massachusetts, Hawaii, Vermont, Minnesota, and Iowa -- have elected to do so. Pennsylvania, Wisconsin, and Kansas are the three of the 11 that have not. 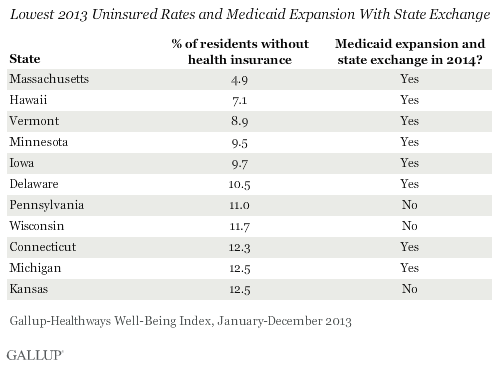 See Page 2 for a full listing of all 50 states.

Overall, 16.2% of adults report that they lack health insurance in states that have thus far chosen Medicaid expansion and state exchanges, compared with 18.7% among adults in states that are implementing one or neither.

As states grapple with how to implement the Affordable Care Act, a pattern has emerged that reveals that states with the highest rates of uninsured residents are among the least likely to expand Medicaid and to establish state-based exchanges. Utah's apparent recent decision to expand Medicaid means that for the first time, a majority of states (plus the District of Columbia) plan to do so. Thus far, however, most states headed by Republican governors have decided against voluntary state action, preferring to pursue other means of lowering uninsured rates among their residents.

While a majority of Americans continue to disapprove of the law, preliminary data suggest that its intended effects are beginning to occur, with a small decline in the percentage who are uninsured reported in mid-January. And, for the first time since October, when Gallup began regularly tracking uninsured Americans' plans for getting insurance, a majority of the uninsured now plan to get their insurance from exchanges.

Results are based on telephone interviews conducted as part of the Gallup-Healthways Well-Being Index survey Jan. 2-Dec. 29, 2013, with a random sample of 178,068 adults, aged 18 and older, living in all 50 U.S. states and the District of Columbia.

Americans continue to be more likely to disapprove than approve of the Affordable Care Act, 51% to 41%. Nearly six in 10 believe the law, in the long run, will make the healthcare situation in the U.S. worse or will make no difference.