WASHINGTON, D.C. -- Americans' familiarity with the Affordable Care Act has remained static since last August, even after new provisions of the law have taken effect and the Obama administration has tried to promote understanding of it. A majority of Americans (68%) are very or somewhat familiar with the law, while a third of the country is not too or not at all familiar with it. Gallup found nearly identical familiarity numbers last August. 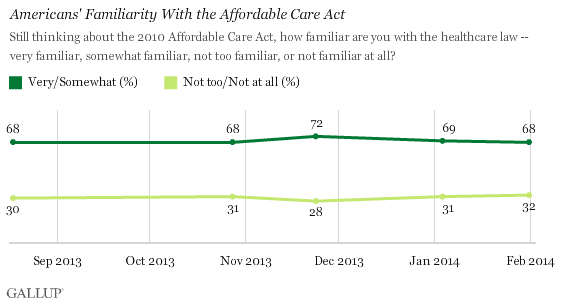 These results come from a Jan. 31-Feb. 1 Gallup poll. While a majority of Americans may disapprove of the still-unfolding healthcare law, commonly known as "Obamacare," nearly one in three are not too or not at all familiar with the measure.

Republicans More Familiar Than Democrats With the Law

Despite their general opposition to the law, Republicans are significantly more likely to say they are familiar with it than are independents or Democrats. The percentage of Republicans who have some degree of familiarity with the legislation (78%) is markedly above the 64% of Democrats who say they have a similar level of knowledge.

This party dynamic partially helps explain why familiarity with the ACA appears to breed contempt. Nearly six in 10 Americans (58%) who say they are very or somewhat familiar with the law disapprove of it. By contrast, those not too or not at all familiar with the law are more divided in their opinions of the law -- 44% of this group approve and 35% disapprove, with 23% unsure.

Whether it's the well-publicized website glitches, the focus on Obama's erroneous declaration that "if you like your plan, you can keep it," the requirement that most Americans have health insurance, or the law's brief appearance in last week's State of the Union address, the ACA has been the center of attention for some time.

But this has not translated into more Americans saying they are familiar with the ACA. This watershed legislation that will change the face of the U.S. healthcare system, for better or worse, remains somewhat of a mystery for a significant portion of the nation.

Results for this Gallup poll are based on telephone interviews conducted Jan. 31-Feb.1, 2014, on the Gallup Daily tracking survey, with a random sample of 1,017 adults, aged 18 and older, living in all 50 U.S. states and the District of Columbia.

Americans continue to be more likely to disapprove than approve of the Affordable Care Act, 51% to 41%. Nearly six in 10 believe the law, in the long run, will make the healthcare situation in the U.S. worse or will make no difference.