WASHINGTON, D.C. -- As French President Francois Hollande visits the U.S. this week, including being honored at the first state dinner of President Barack Obama's second term, 78% of Americans view France favorably. This represents a full restoration of France's U.S. image more than 10 years after it tumbled to 34% favorable in 2003, when France refused to back the U.S.-led invasion of Iraq. 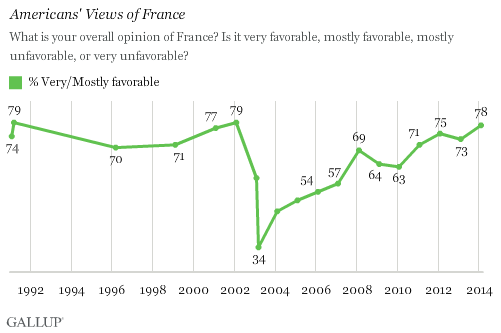 Overall favorability toward France in the U.S. is near the record of 79% measured in 1991 and 2002. The 1991 reading may have reflected Americans' appreciation for France's active participation in the 1991 Gulf War, and the 2002 poll came shortly after the 9/11 terrorist attacks, when Americans may also have welcomed French moral support.

However, France's opposition to the United States' call for U.N. support for the Iraq war in 2003 upended the country's image in the U.S. Not only did 64% of Americans view France unfavorably in a March 2003 Gallup poll, but 39% viewed their longtime ally very unfavorably. Outrage toward France spurred numerous restaurants to rename French fries, "freedom fries." Those restaurants included three House of Representatives cafeterias, which also renamed French toast, "freedom toast."

As the 2000s wore on, Americans' opinions of France improved, with favorable views doubling to 69% by 2008. In 2011, favorability ratings reached the 70% range, where they have since remained. The positive sentiment comes at a time when Hollande is embroiled in scandal at home over a bitter split with his partner.

Although Gallup's World Poll does not ask the French for their views of the U.S. as a country, it does ask them to evaluate U.S. leadership, which has a bearing on their support for U.S.-French cooperation. French opinion of U.S. leadership has not always been rosy. After reaching single digits toward the end of the Bush presidency in the late 2000s, French approval of U.S. leadership quadrupled at the start of Obama's presidency, peaking at 55% approval in 2010. French support has dropped more recently, standing at 40% in April-June 2013, just below Obama's approval rating among Americans at the same time. A sizable portion of the French people, however -- 34% -- have no opinion about U.S. leadership. 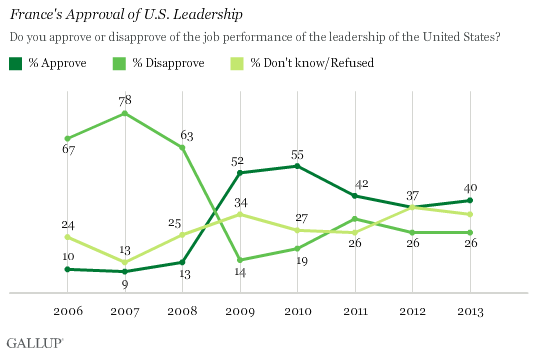 Part of these more negative thoughts may be linked to ongoing tensions that have existed throughout Obama's presidency, which include Obama's not yet closing the detention facility at Guantanamo Bay, not pulling U.S. troops out of Afghanistan, and the drone strike policies of the U.S. military. Obama and Hollande announced in the Washington Post this week a "renewed alliance" between France and the U.S., citing a commitment to work together on pressing issues of mutual interest, including nuclear talks with Iran.

The American-French alliance dates back to the American Revolutionary War and was solidified during the French Revolution of 1789. This partnership endured two world wars but was tested during the Iraq war of the last decade. Americans' support for France, which dipped sharply in 2003-2004, has returned to highs last seen in the 1990s and early 2000s.

Gallup trends show that more than half of French residents disapprove of U.S. leadership or do not offer an opinion. This suggests that the mutual warm feelings Obama and Hollande discuss in their Washington Post piece may take a while to resonate with the French public. It remains to be seen whether Hollande's state visit will bolster feelings toward U.S. leadership in his homeland, or whether Obama's lackluster approval ratings will receive a boost, domestically, as well.

Results for this Gallup poll are based on telephone interviews conducted Feb. 6-9, 2014, with a random sample of 1,018 adults, aged 18 and older, living in all 50 U.S. states and the District of Columbia.