WASHINGTON, D.C. -- As host nation Russia dominates the world stage at the Winter Olympics in Sochi, Americans clearly do not think highly of the country or its president, Vladimir Putin. Putin and Russia score the highest unfavorable ratings -- 63% and 60%, respectively -- that Gallup has recorded for them in the past two decades. 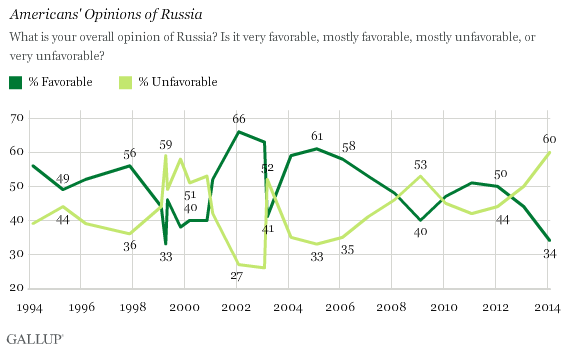 These sentiments, based on a survey conducted Feb. 6-9, continue the downward trajectory in Americans' opinions since Putin returned to Russia's presidency in 2012. These results align with Gallup's findings last fall when Americans, for the first time in 14 years of Gallup polling on the topic, said they consider Russia an enemy, not an ally. In the past year, Russia has faced scrutiny for granting former National Security Agency contractor Edward Snowden asylum, involving itself in the Syrian civil war, and restricting gay and lesbian civil rights. The threat of terrorism at the Olympics and the allegedly substandard conditions at the Winter Games have also been big media stories in the past several months.

While their unfavorable ratings of Russia are at an all-time high, Americans' perceptions of the world power have not always been positive in the years since the former Soviet Union collapsed in 1991. In 1999, Russia's bombing of the former Soviet republic of Chechnya, along with its opposition to the NATO war in Kosovo, likely soured American opinion toward Russia. Another spike in anti-Russian opinion occurred in March 2003 (52% unfavorable) when Russia refused to back the U.S. in the Iraq war, claiming that only the United Nations could settle the dispute.

Gallup first asked Americans about Russia in 1994, more than two years after the Soviet Union's collapse. Since then, Americans have expressed the most positive views in 2002, with 66% rating the country favorably.

Not surprisingly, Americans' views of Russia and Putin are parallel, perhaps because Putin and Russia have become synonymous. More than six in 10 Americans currently have an unfavorable opinion of Putin, the highest negative rating in the four times Gallup has asked about him since he became president for the first time in 1999. Putin's op-ed criticizing the U.S. in the New York Times last September may have contributed to this low opinion. In the op-ed, he claimed that President Barack Obama's statement about American exceptionalism was "extremely dangerous." Obama had said that the ability of the U.S. to intervene in geopolitical conflict when needed is "what makes us exceptional" Just after the publishing of the op-ed, Gallup found that 54% of Americans viewed Putin unfavorably.

Americans at the time endorsed Putin's plan to rid Syria of chemical weapons, but apparently that validation did not improve feelings overall. Tension between Russia and the Ukraine, along with ongoing concerns about the threat of terrorism at the Olympics and Russia's anti-gay legislation, may be adding to Putin's unfavorability. 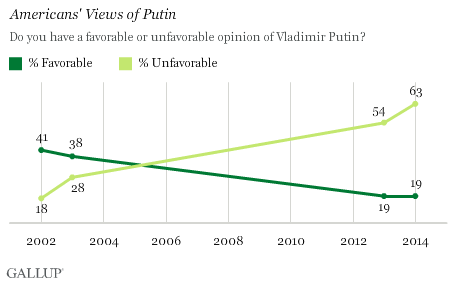 Over the past year, Russia has pursued a much more aggressive stance on the world stage than at any time in the new millennium. In his first term in office, Putin was viewed more favorably than unfavorably by the American public, but Americans now see him in a clearly unfavorable light.

Russia itself, which the U.S. long viewed with suspicion during the Cold War days, has traveled a more complicated path since. While American sentiments have been mostly favorable over the past 20 years, it is obvious that Americans will react strongly at moments when Russia clashes with the U.S. The Chechnya conflict, the Iraq war, and now a multitude of factors -- Snowden, Syria, Putin's taking issue with American "exceptionalism," Ukraine, and Russia's anti-gay policies -- distinctly affect Americans' views of Russia and its leader.

Read how Putin's popularity is waning among Russians as well, according to the Gallup World Poll.

Results for this Gallup poll are based on telephone interviews conducted Feb. 6-9, 2014, on the Gallup Poll Social Series, with a random sample of 1,018 adults, aged 18 and older, living in all 50 U.S. states and the District of Columbia.