WASHINGTON, D.C. -- North Dakota residents had the highest well-being in the nation in 2013, according to the Gallup-Healthways Well-Being Index. South Dakota trailed its northern neighbor in second place, with its highest score in six years of measurement. Hawaii held the top spot for the previous four years, but fell slightly last year. West Virginia and Kentucky had the two lowest well-being scores, for the fifth year in a row. These state-level data are based on more than 178,000 interviews with American adults across all 50 states, conducted from January-December 2013. Gallup and Healthways started tracking state-level well-being in 2008. The Gallup-Healthways Well-Being Index score for the nation and for each state is an average of six sub-indexes, which individually examine life evaluation, emotional health, work environment, physical health, healthy behaviors, and access to basic necessities.

In addition to North Dakota's having the highest overall Well-Being Index score, it was the top state on two of the six well-being sub-indexes: Work Environment and Physical Health. At the opposite end of the spectrum was West Virginia, which ranked last on all sub-indexes except Work Environment.

Nebraska topped all other states on the Life Evaluation Index, with a score that was 17 points higher than West Virginia's. Alaska boasted the highest Emotional Health Index score, while Vermont led all states in Healthy Behaviors for the second straight year. Massachusetts had the best score on the Basic Access Index for the fourth straight year, which is partially a result of having the highest percentage of residents with health insurance in the nation. 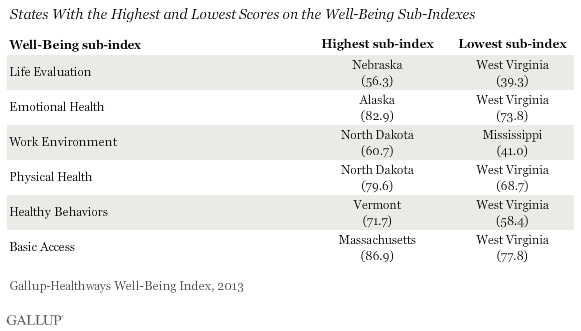 Well-being has been fairly stable nationally since 2008. However, since 2010, the first full year after the Great Recession officially ended, 11 states' well-being scores have shown year-over-year improvement, with the largest gains seen in Nevada, Montana, Vermont, Nebraska, Iowa, and Maine. Four of these states -- Montana, Vermont, Nebraska, and Iowa -- also were among the top 10 well-being states in 2012 and 2013, making their continued improvement notable given their already high Well-Being Index scores. 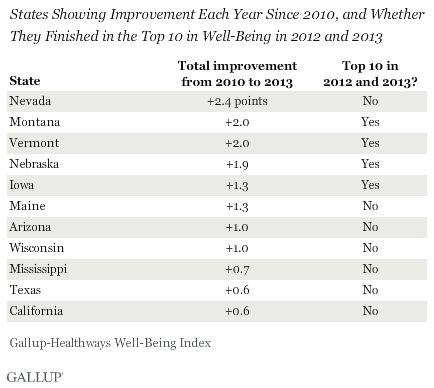 Overall well-being in the U.S. and within states has been fairly steady since 2008, although the national Well-Being Index score fell in 2013. The nation's well-being declined despite improvement in economic confidence in most states. Still, steady growth in 11 states' well-being scores since 2010 illustrates that sustained improvements in well-being are possible regardless of national trends. Four states in particular -- Montana, Vermont, Nebraska, and Iowa -- demonstrate that steady progress is possible, even among the top 10 well-being states.

Gallup's research has shown that people take a variety of factors into account when evaluating their well-being. Job creation, for example, is related to well-being; Gallup's job creation rankings for 2013 are correlated with the well-being rankings. The 2013 Payroll to Population (P2P) state rankings are also correlated with top and bottom well-being states. North Dakota, which has benefited economically from the surge in its oil industry, was the top state in both job creation and P2P in 2013. And other behavioral factors, such as smoking rates, generally line up with well-being at the state level as well.

Regardless of metrics such as employment and job creation, all states rely on strong leadership to spearhead their well-being efforts. Iowa's Healthiest State Initiative, for example, is a privately led, government-supported program designed to improve Iowa's well-being, and has received Gov. Terry Branstad's support since its inception. This sort of steady advocacy for higher well-being can serve as a positive example for other leaders to follow as states try to improve their residents' well-being in 2014.