These results are based on Gallup Daily tracking interviews conducted from Aug. 7-Dec. 29, 2013, in which adults younger than 35 were asked about their current living arrangements. Fourteen percent of those between the ages of 24 and 34 report that they live at home with their parents.

Gallup classifies Americans as "thriving," "struggling," or "suffering," according to how they rate their current and future lives on a ladder scale with steps numbered from 0 to 10, based on the Cantril Self-Anchoring Striving Scale. People are considered thriving if they rate their current lives a 7 or higher and their lives in five years an 8 or higher.

Previous Gallup research shows that young adults who live at home are significantly less likely to be married, to be employed full time, and to have a college education than those who are the same age but don't live at home. Because all three of these characteristics are related to how people evaluate their lives, it is not surprising to find that those living at home are less likely to be thriving.

However, even after accounting for marital status, employment, education, and a number of other demographic variables, those living at home between the ages of 24 and 34 still are less likely to be thriving. This suggests that while living with one's parents may have some benefits for young people who have not yet found their full footing in society, the net effect of living at home lowers young adults' perceptions of where they stand in life.

In other words, even among young adults who have equal status in terms of being single, not being employed full time, and not having a college education, those who do not live at home are more likely to be thriving than those living at home. Something about living at home appears to drive down young adults' overall life evaluations.

A broader measure of well-being, the Gallup-Healthways Well-Being Index, which is based on physical and emotional health and other factors, as well as life evaluations, reflects the same pattern. The index summarizes more than 50 different well-being items and is calculated on a scale of 0 to 100, where a score of 100 represents ideal well-being. Young adults living at home have a Well-Being Index score of 63.73, while the score for those not living at home is 65.36. 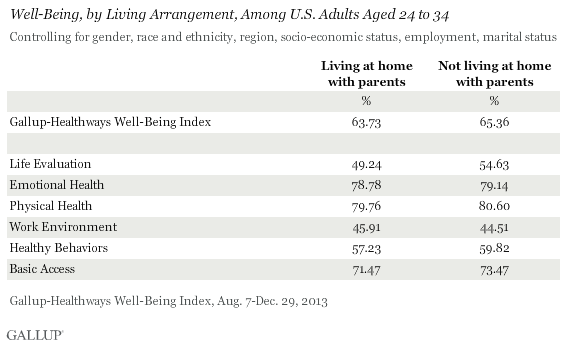 Those aged 24 to 34 who live at home generally do at least marginally worse than those who do not live at home on five of the six domains of well-being -- life evaluation, physical health, emotional health, healthy behaviors, and basic access to things that promote healthy living. Those living at home but who are in the workforce score marginally better on the work environment index than those not living at home.

This research on the well-being of young adults living at home with their parents is the first of its kind at Gallup, although research conducted at Ohio State and elsewhere suggests that living at home is increasingly common among those younger than 35 today.

The data show that those between the ages of 24 and 34 who live at home tend to be unattached -- in the sense that they are not married and less likely to have a full-time job -- and also to be less well-educated. This research underscores the idea that living at home may have some emotional costs for young adults -- particularly in terms of their perceptions that they are not enjoying the best possible life, beyond those associated with being unemployed or unmarried.

Times may change. If marriage rates rebound, the job market for young adults improves, and more young Americans go to college, then living at home may be less common in the years ahead. If that happens, young Americans' overall well-being may improve.

Results for this Gallup poll are based on telephone interviews conducted as part of the Gallup-Healthways Well-Being Index survey from Aug. 7-Dec. 29, 2013, with a random sample of 3,445 adults, aged 18 to 34, living in all 50 U.S. states and the District of Columbia, who report they are currently living at home with their parents.

For results based on the total sample of 1,076 adults aged 24 to 34 who are living at home with their parents, the margin of sampling error is ±4 percentage points at the 95% confidence level.