PRINCETON, NJ -- After years of being generally skeptical about foreign trade, or at best divided over it, Americans now firmly view trade as a benefit to the U.S. economy. Similar to last year, 54% of Americans say trade represents an opportunity for economic growth through increased U.S. exports, while 38% consider it a threat to the economy from foreign imports. 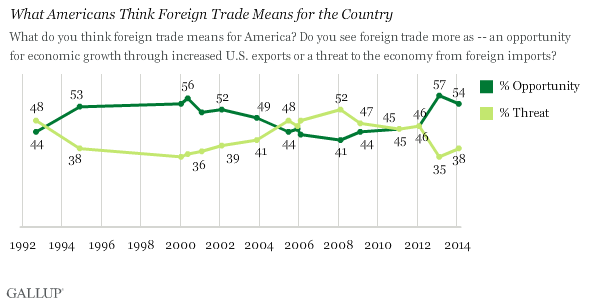 North American leaders gathered this week to mark the 20th anniversary of the North American Free Trade Agreement (NAFTA) and discuss further commercial integration and expansion into the Asia-Pacific region. The Obama administration has been working to reach two major new free trade deals with Europe and 11 Pacific-facing countries, although Vice President Joe Biden recently indicated these efforts may be on hold because Senate Democrats do not support it.

Americans' perceptions of foreign trade may partly stem from their confidence in the U.S. economy. Public skepticism about foreign trade peaked in 2008, when 52% saw it mainly as a threat whereas 41% saw it as an opportunity. At the same time, the Gallup Economic Confidence Index was highly negative, at -32. Americans were evenly divided on trade for the next few years, through 2012, as economic confidence remained quite negative. Then, in 2013, along with an uptick in confidence, Americans turned sharply positive about trade. And that pattern holds today. 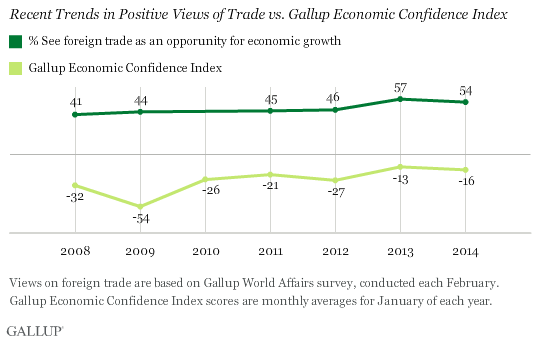 Another factor may be the country's narrowing trade deficit. In 2008, when a comparatively low percentage of Americans saw foreign trade as an opportunity (41%), the U.S. was running a seasonally adjusted trade deficit of $816 billion. In 2013, the deficit was a much lower $688 billion.

Partisan Gaps on Trade Have Varied by President

Current public attitudes about trade mirror those Gallup recorded in the first decade after NAFTA went into effect in 1994, after a robust debate in Congress and a narrow House vote in favor of the measure. President Bill Clinton strongly endorsed and encouraged ratification of the agreement, but there were also strong proponents and detractors on both sides of the political aisle. In particular, Clinton had to rely on more Republican than Democratic votes to get the measure through Congress.

Shortly before President George H. W. Bush signed the NAFTA agreement in 1992, Republicans were significantly more likely than Democrats to see foreign trade as an opportunity: 49% vs. 36%. However, by 1994, with Clinton backing the measure and reaching a side agreement meant to add some protections for American workers, Democrats' support grew to nearly match Republicans': 58% of Republicans and 54% of Democrats called foreign trade an opportunity.

The partisan gap on foreign trade remained narrow at the start of George W. Bush's presidency, but it widened as his term progressed, possibly indicating that Democrats have greater fear of foreign trade policies under Republican leadership. By 2008, as the country faced mounting economic problems, support for foreign trade waned among Republicans, falling to nearly match Democrats' lower support. Since then, and throughout Barack Obama's presidency, Democrats and Republicans have expressed nearly identical support for foreign trade as an opportunity, with agreement surging among both parties, as well as among independents, in 2013, and remaining high this year. 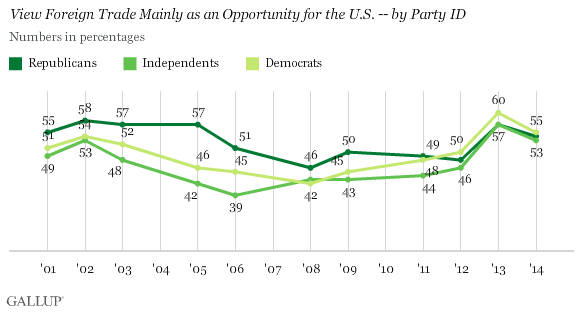 Trade More of a Socioeconomic Than a Partisan Issue

Gallup trends since 2001 find Americans' perceptions of foreign trade far more divided along educational lines than by political party. College graduates and those with postgraduate education are significantly more likely to see foreign trade as an opportunity for the U.S. than are those with no college or even some college education. 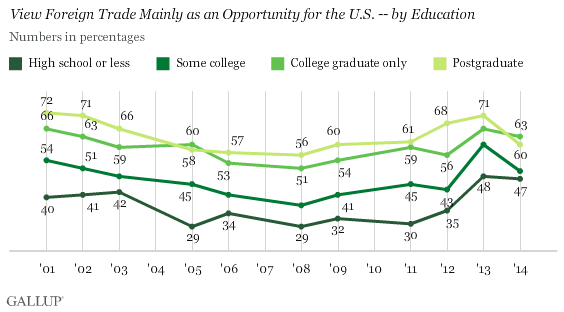 As the Obama administration strives to reach watershed free trade agreements with the European Union and a collection of Pacific Ocean-facing nations forming a new bloc known as the Trans-Pacific Partnership, Americans view foreign trade positively today, mainly seeing it as an opportunity for economic growth through exports rather than as a threat to the economy through imports. This positive outlook is similar to what Gallup found in 2013, but represents a sharp reversal of the more mixed, or even negative, view Americans had of trade during the prior eight years.

The change likely stems from the increase in Americans' confidence in the economy since the depths of the 2008-2009 recession. It may also reflect Democrats' greater confidence in foreign trade when a Democrat is in the White House. Meanwhile, Americans with lower education -- a group most likely to feel their livelihood is at risk when U.S. manufacturing dries up -- remain far more skeptical of the merits of foreign trade than their more educated counterparts.