skip to main content
Economy
Only a Third of the Oldest Baby Boomers in U.S. Still Working

PRINCETON, N.J. -- The first members of the huge baby-boom generation in the U.S. have reached retirement age in recent years, and these older boomers are retiring in large numbers, just as Americans in their mid- to late 60s did a few years earlier. While about eight in 10 boomers in their early 50s are in the workforce, the percentage employed drops to about 50% for boomers who are 60, and the proportion accelerates downward with each year of age thereafter. Only about a third of those aged 67 and 68 -- the oldest boomers -- are still working in some capacity. These workforce estimates are based on 134,168 Gallup Daily tracking interviews conducted in 2014 with Americans aged 50 to 68 -- those born from 1946 through 1964, the post-World War II years commonly used to define the baby-boom generation. Americans are classified as being in the workforce if they report being employed full time for an employer or self-employed, working part time, or not working but able to work and actively seeking employment.

Older Boomers' Retirement the Same as Pre-Boomers Four Years Ago

Much attention has been paid in recent years to pending changes in the work status of aging baby boomers, with some suggestions that boomers may work longer and postpone retirement. While the last boomer will reach age 65 in 2029, the early indications from the available evidence suggest that boomers are retiring "on time." The percentage of 65- to 68-year-olds still in the workforce in 2014 is almost identical to what Gallup measured among the pre-boomers of this age range in 2010. Thus, the vanguard of the boomer generation is retiring at nearly the identical rate as were pre-boomers four years ago.

This is a short-term comparison, and other Gallup data suggest that from a broader perspective, Americans have been retiring at an older age than they did years or generations ago. And, when asked in previous research about their retirement intentions, large numbers of working baby boomers have indicated that they are going to retire after age 65 or not retire at all. Still, the 2010 to 2014 comparison is important because it provides a valuable look at the first group of boomers who have moved past the traditional retirement age of 65 over the past four years, and the results do not support the hypothesis that baby boomers are staying in the labor force longer than those who came immediately before them.

There are interesting variations by type of work as baby boomers age. The percentage of boomers working part time edges up from around 10% among those in their 50s, to 15% among boomers who are 68. This modest increase in part-time work is occurring even as the percentage working full time drops dramatically down to a similar 16% level. Thus, while most of those who abandon full-time working status are leaving the workforce altogether, a small percentage appear to be moving into part-time work. Overall, about half of those still in the workforce at age 68 are working full time, while half are working part time. 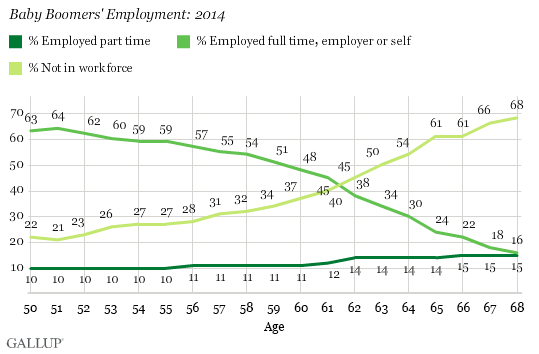 Same Patterns for Men and for Women

At every age increment, male baby boomers are more likely than female boomers to be in the workforce, with remarkably little variation in this pattern across the age spectrum. At age 50, the gender gap in the percentage working full time is 12 percentage points -- 84% of men working, contrasted with 72% of women. At the other end of the boomer range, the gap is also 12 points, with 38% of men in the labor force, contrasted with 26% of women. Even though the gap between the workforce participation rate of men and women stays about the same across the baby-boom years, there are subcurrents at work within the broader workforce categories. Both men and women leave the full-time work category as they age, but men drop out of full-time status a little more quickly than women. By age 68, the gap in full-time workforce participation between men and women is eight points, compared with a double-digit gender gap of as much as 20 points in the earlier years. On the other hand, men become somewhat more likely to work part time in their older boomer years, while part-time work stays constant among women. Thus, by age 66, there are more part-time working men than women, a flip from the pattern among younger baby boomers aged 50 to 65. Despite some expectations that baby boomers will defy the usual working patterns of aging Americans and stay in the workforce longer than those who came before them, the data do not appear to support that expectation. Boomers aged 65 to 68 are retiring at about the same rate as those who were in that age range a few years ago. By age 68, only about a third of boomers are still in the workforce, including just 16% who are working full time. Prior research indicates that from a long-term perspective, the average retirement age has been increasing, but according to these new findings, in the short term, boomers appear to be leaving the workforce in predictable numbers.

The baby-boom generation is large, and the pattern of retirement that appears to be taking place among older boomers thus can potentially have a significant effect on lowering the overall workforce participation rate. This inevitable aging of the U.S. population leaves a smaller percentage of the population working and supporting their elders through Social Security and Medicare. It also means the U.S. could face a shortage of workers without a substantial influx of people from other countries.

The aging baby boomers who do choose to stay in the workforce may have increasing value to employers, and other analyses in Gallup's series on boomers will investigate the employee engagement of these labor segments compared with those who are younger.

The increasing size of the retired labor force of aging boomers will have the potential to affect society in many other ways as well, including changing patterns of housing, travel and leisure, politics and retail commerce, and an increasing need for healthcare services.

Results for this Gallup poll are based on telephone interviews conducted Jan. 2-Dec. 30, 2014, on the Gallup U.S. Daily survey, with a random sample of 134,168 adults, aged 50 to 68, living in all 50 U.S. states and the District of Columbia. For results based on the total sample of national adults, the margin of sampling error is ±1 percentage point at the 95% confidence level. All reported margins of sampling error include computed design effects for weighting.