WASHINGTON, D.C. -- Fifty-three percent of Americans rate the quality of healthcare in the U.S. as "excellent" or "good." This is similar to what Gallup has found since 2013, but is down from the more positive ratings of 2008 to 2012. Fewer Than One in Four Satisfied With U.S. Healthcare Costs

Americans' satisfaction with the total cost of healthcare in the U.S. remains low, with 21% saying they are satisfied. Twenty-eight percent were satisfied in 2001, but satisfaction fell after that, rising again only in 2009, to 26%. This increase too may reflect optimism about the possibilities of Obama's healthcare reform. However, satisfaction has since slipped. Although Americans were more positive about the cost, quality and coverage of U.S. healthcare in the early years of the Obama's first term, that optimism has faded to some degree. Americans' ratings of healthcare coverage are not high, but remain higher than they were in George W. Bush's second term. This may have something to do with the ACA, especially as the U.S. uninsured percentage has dropped since the ACA exchanges opened. The ACA may not have had such obviously positive effects on cost and quality, which Americans generally regard as no better than before Obama took office.

At the same time, Americans continue to rate their personal healthcare positively overall, although again without much improvement since the recent healthcare reform took effect. Americans are more negative about the healthcare system in the U.S. in general as opposed to their own healthcare. A similar phenomenon is found when Americans rate personal or local conditions compared with national conditions in areas such as education, government and crime. 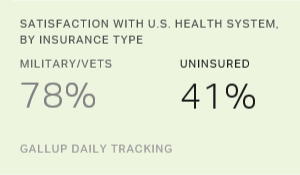