skip to main content
Wellbeing
Half of Overweight in U.S. Not Seriously Trying to Lose Weight

WASHINGTON, D.C. -- More than three in 10 American adults (31%) say they weigh at least 20 pounds more than their "ideal" weight, and almost all of these (90%) want to do something about it. But less than half (48%) say they are "seriously trying to lose weight."

For the group reporting their weight as 20 pounds or more above their ideal, the average self-reported actual weight was 213 pounds, including an average 237 for men and 193 for women.

These results generally echo findings from four previous Health and Healthcare surveys conducted from 2011-2014. Combining the results from the last five surveys allows a more in-depth look at how Americans view their actual weight compared with how much they think they should weigh:

Chances of Being Overweight Affected by Age, Gender, Income

Gallup's last five annual Health and Healthcare polls (2011-2015) show that age, income, gender and education all are significant factors in whether someone exceeds his or her preferred weight by at least 20 pounds. In addition to the basic subgroup findings, the larger data set allows for a look at some smaller subgroups. Among the findings:

Questions about how close people are to their ideal weight are dependent on the individual's idea of what that weight should be. Even with that in mind, the evidence from five years of Gallup polls clearly shows that a large percentage of Americans see themselves as overweight. It is possible or likely that people may be somewhat less than accurate in disclosing their weight in a telephone interview; even so, a substantial 31% of Americans say they are 20 pounds heavier than their self-defined ideal weight. Further, though most of those who are overweight realize they are, the far lower percentage who are doing something about it is not increasing over time.

Results for this Gallup poll are based on telephone interviews conducted in 2011, 2012, 2013, 2014, and most recently, Nov. 4-8, 2015. The aggregated sample for the five polls contains 4,915 adults, aged 18 and older, living in all 50 U.S. states and the District of Columbia. For results based on the total sample of national adults, the margin of sampling error is ±3 percentage points at the 95% confidence level. 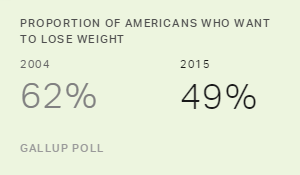