WASHINGTON, D.C. -- As Americans enjoy Thanksgiving leftovers this year, about half (49%) say they would like to lose weight. This is down from readings near 60% from 2001 to 2008. As part of the Gallup-Healthways Well-Being Index, Gallup calculates Americans' body mass index scores based on respondents' self-reported height and weight. The obesity rate ticked up to 27.7% in 2014, the highest rate recorded since Gallup and Healthways began tracking it in 2008. Still, Americans' desire to lose weight has not increased.

In addition to being less likely to say they want to lose weight in recent years, fewer Americans say they are making a concerted effort to do this. Less than a quarter of adults (24%) report they are "seriously trying to lose weight." This is the lowest reading since 2002, though it is similar to the 25% to 30% of adults who said they were "seriously" trying from 2003 through 2014. Obesity in the United States has become a greater concern in the medical community and in society at large. In recent years, Gallup and Healthways have documented a slight but notable increase in the percentage of Americans who can be classified as obese, based on BMI calculations that use self-reports of height and weight. And obesity has ranked near the top of the list when Americans are asked to name the most urgent health problem facing the U.S.

Even so, the percentage of Americans who want to lose weight has dipped below the 50% mark for the first time in at least two decades, and a solid majority continue to say their weight is "about right." It is unclear whether those self-assessments are based on Americans' success in losing weight, or on a change in their thinking about what constitutes a healthy weight. Americans who are slightly above a normal weight, by BMI standards, may think of themselves as being "about right" and not urgently needing to lose weight. 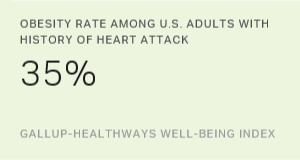