Gallup began asking this question in August 2001 and has asked it monthly since October 2001. The annual average saying it is a good time to find a quality job has been higher than 40% only three times, in 2006, 2007 and now in 2015. Optimism about quality job prospects dropped dramatically between 2007 and 2008 and bottomed out at an average of 10% in 2009. Each year since then, job market assessments have improved at least slightly. The largest increase was evident this past year, during which unemployment levels have been the lowest the government has measured since 2007.

Among all major subgroups, the percentage saying it is a good time to find a quality job was higher in 2015 than it was in 2014, with nearly every group showing a double-digit increase.

One's political affiliation greatly influences assessments of the job market, as a majority of Democrats (53%) say now is a good time to find a quality job, compared with 32% of Republicans and 40% of independents. Democrats have also shown a larger increase in "good time" ratings since last year than Republicans and independents. The increase in the percentage of Americans who say it is a good time to find a quality job aligns with improvements in other Gallup economic measures. The Gallup Good Jobs rate has been slightly higher most months in 2015 than in comparable months in the past few years. Moreover, Gallup's Job Creation Index has been steady at a record high for most of 2015. Additional Gallup measures show that other aspects of the economy may still be fragile, however. Average consumer spending remains higher than Gallup found in 2009 through 2012 but has yet to cross the $100 threshold last reached in 2008. Americans' perceptions of the economy generally are down significantly from where they were at the end of last year and the beginning of this year. While the job market in the U.S. looks far better than it did in the aftermath of the Great Recession, not all economic measures have recovered to prerecession levels. 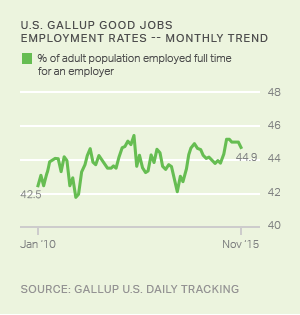 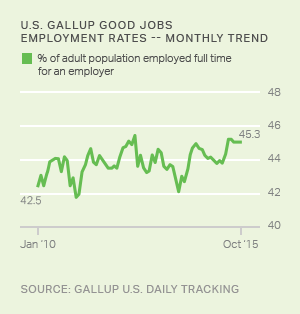