​PRINCETON, N.J. -- Americans' satisfaction with how things are going in their personal life continues to recover after the percentage very satisfied dipped below 50% during the 2008 Wall Street economic crisis. Still, at 53%, personal satisfaction falls short of the 55% to 59% range in the years leading up to 2008. More broadly, 85% of U.S. adults are either very or somewhat satisfied with the direction of their personal life. While overall personal satisfaction is high among most U.S. subgroups, the percentage very satisfied varies considerably, particularly by household income. Two-thirds of adults in households earning $75,000 or more were very satisfied with the direction of their own life in the Jan. 6-10 Gallup poll, but this drops to 51% among those earning between $30,000 and $75,000 and to 39% among those earning less than $30,000.

Significant differences are also seen by marital status and religious affiliation. Married adults are much more likely than those who are not married -- encompassing widows, divorcees and those never married -- to be very satisfied with their own lives, 61% vs. 46%, respectively. Of the three largest religious blocs in the U.S., Catholics (60%) and Protestants (55%) are more likely than nonreligious Americans (47%) to be very satisfied.

By contrast, little to no significant differences are seen by gender, age, race or party identification. Despite the current parity in Republicans' and Democrats' "very satisfied" percentages, the trend has been different for each. Republicans were consistently more likely to be very satisfied than Democrats from 2001 through 2007 -- spanning most of Republican President George W. Bush's two terms in office. That pattern remained in the next reading -- in December 2008 -- as personal satisfaction dropped, because the decrease was similar among the two groups. However, Democrats' satisfaction has rebounded while Republicans' has remained low, resulting in the two groups now reporting similar satisfaction. The percentage very satisfied differs by income level, with the highest income group consistently the most satisfied and the lowest income group the least satisfied. High satisfaction dropped the most in 2008 among the high-income group, likely due to their greater exposure to the stock market crash at the end of that year, but satisfaction for this group has gradually improved in the years since. Satisfaction among the two lower-income groups continued to decline in 2011, possibly reflecting the challenging job market and wage stagnation during this period, but has since improved among both groups. Still, none of the groups have recovered to their pre-2008 highs. Americans are largely satisfied with their personal lives, suggesting the issues that are so troubling to many on the national level -- the economy, political gridlock, terrorism and a host of domestic issues -- don't affect most people's daily lives. At the same time, the 2008 market collapse and the slow, still incomplete recovery in the years since the 2007-2009 recession clearly affected people, causing fewer to see their lives in highly positive terms.

The other factor possibly shading these perceptions is partisan politics, with Republicans less likely to believe, or at least admit, their lives are going well with a Democratic president in office. Thus, the outcome of the November election will likely decide if the current pattern of satisfaction by party ID persists, or if Republicans' attitudes sharply improve along with a party change in the Oval Office. 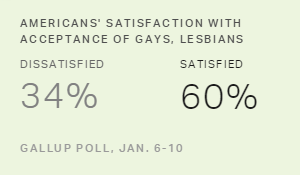 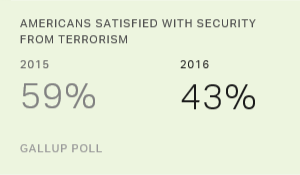 Majority in U.S. Now Dissatisfied With Security From Terrorism

Americans' satisfaction with the nation's security from terrorism fell significantly for the second year in a row. It is now at 43%, versus 59% last year and 69% in 2014. Satisfaction with U.S. military strength also dropped.