WASHINGTON, D.C. -- Minnesota residents were the most positive of any state's residents about the national economy in 2015, with an Economic Confidence Index score of +3. Minnesota was followed by California and Massachusetts, the only states where residents' views of the U.S. economy were more positive than negative. This is the first year since Gallup began tracking economic confidence daily in 2008 that any states have had a positive score. The District of Columbia, not included in the state rankings, has had positive scores since 2012, including +29 in 2015.

The Gallup Economic Confidence Index is the average of two components: Americans' ratings of current economic conditions in the U.S. and their perceptions of the economy's direction. The index has a theoretical maximum of +100, if all adults rate current conditions positively and say conditions are improving or staying the same, and a theoretical minimum of -100, if all adults rate the economy poorly and say it is getting worse or not changing.

Nationally, Gallup's Economic Confidence Index averaged -8 in 2015, the best score in eight years of tracking economic confidence daily. The year began at a high point, with index averages occasionally reaching positive territory from January through March. Economic confidence slowly slipped through much of the summer before stabilizing in September and through the end of the year.

The rank order of the 50 states is fairly similar to what Gallup found in 2014 when Minnesota also topped the list. In fact, Minnesota residents' confidence in the national economy has been the highest or second-highest each year since 2011. California, the state with the second-highest Economic Confidence Index in 2015, has been among the top five states since 2013. The five states that tied for 10th place, Oregon, Nevada, New Hampshire, Arizona and New Jersey, are all on the top states list for the first time in 2015. This is a substantial improvement for these states, as all five of them have previously ranked among the bottom states in prior years.

Gallup's Economic Confidence Index was lowest in West Virginia in 2015, at -39. While this is up slightly from the -42 the state averaged in 2014, West Virginia has ranked last each year since 2010. Most of the states among those with the lowest Economic Confidence Index in 2015 were also near the bottom of the list in 2014, but their order on the list has shifted somewhat. Oklahoma, the state with the second-lowest Economic Confidence Index in 2015, at -27, dropped several spots from 2014. Meanwhile, Alabama was the second-lowest state in 2014 but moved up several spots in 2015. Montana and Alaska did not rank among the 10 lowest states in 2014, but both were among the lowest in 2013. There is a strong positive relationship between working residents' reports of hiring activity at their place of work -- as measured by Gallup's Job Creation Index -- and evaluations of the national economy. For example, Minnesota residents had the most positive assessments of both workplace hiring activity and of the national economy in 2015. Meanwhile, West Virginia, with the lowest economic confidence for the sixth year, had the second-lowest Job Creation Index score. Many of the states ranking lowest on economic confidence also rank among the lowest on job creation. However, there are exceptions to this pattern: New Jersey, among the top states on economic confidence, is well below average on job creation.

Political concerns also influence confidence; typically, supporters of the president's party are much more positive about the national economy than are supporters of the opposition party. And many of the top-ranking states on economic confidence -- including Massachusetts, Maryland and California -- are the most Democratic and most approving of the job President Barack Obama is doing. And most Southern states, which tend to tilt Republican, have below-average economic confidence.

Results for this Gallup poll are based on telephone interviews conducted Jan. 1-Dec. 31, 2015, on the Gallup U.S. Daily survey, with a random sample of 177,281 adults, aged 18 and older, living in all 50 U.S. states and the District of Columbia. For results based on the total sample of U.S. adults, the margin of sampling error is ±1 percentage point at the 95% confidence level. 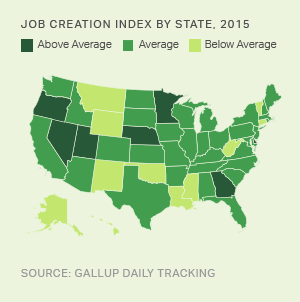