PRINCETON, N.J. -- Ted Cruz's and Donald Trump's images among Republicans have dropped to all-time lows in recent days as exchanges between the Republican presidential candidates have turned highly negative and personal. Cruz's net favorable rating among Republicans is now +14, his lowest to date and essentially the same as Trump's +15. Marco Rubio's image is less positive than it has been at previous points in the campaign, but at +34, it is the same as in early January. Rubio's net favorable score is now twice as high as the scores of either of his major two competitors. The net favorable ratings Republicans and Republican-leaning independents give to Cruz, Trump and Rubio are all at or near their lowest since tracking began, underscoring the clear toll the campaign has apparently taken on how Republicans view these contenders. The latest update comes from Gallup polling conducted Feb. 21-27. During this time, the leading Republican candidates intensified their rhetoric against one another, including at the 10th Republican debate on Feb. 25 and at a Trump campaign event on Friday during which New Jersey Gov. Chris Christie endorsed Trump.

While there has been no shortage of unflattering remarks throughout much of the GOP campaign, the increased amount of personal attacks and insults over the past week likely have negatively affected both Cruz's and Trump's images, although the latter's image has recovered slightly in recent days. Cruz is less well-liked by Republicans and Republican-leaning independents than at any point since Gallup tracking began nine months ago. Rubio maintains a considerably more positive image than either Trump or Cruz, but his net favorable rating is lower than it has been at previous points in the campaign.

Republicans' much more favorable image of Rubio than of Trump or Cruz has not translated into first-place finishes in primary contests so far for the Florida senator. This may partly reflect that Trump's appeal is not based on his being likable or personable, but rather on his rough, critical and reaction-generating persona. As was on display this past Friday, Rubio has made the decision to emulate that more negative, baiting style associated with Trump. Undoubtedly, this is a risk for Rubio. He could hurt his own image more than Trump's by engaging in this type of dialogue. But given Trump's impressive performance thus far in the primaries, Rubio and his advisers may think this is his best gamble to wrestle the lead from the current front-runner.

Results for this Gallup poll are based on telephone interviews conducted on a continuous basis on the Gallup U.S. Daily survey. The latest update used in this report is based on interviewing conducted Feb. 21-27, 2016, with random samples of between 754 and 810 Republicans and Republican-leaning independents, aged 18 and older, living in all 50 U.S. states and the District of Columbia, rating each of the three candidates. For results based on the total sample of Republicans, the margin of sampling error is ±4 percentage points at the 95% confidence level. All reported margins of sampling error include computed design effects for weighting. 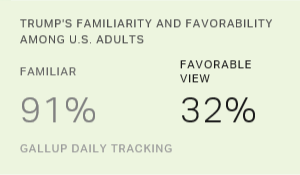 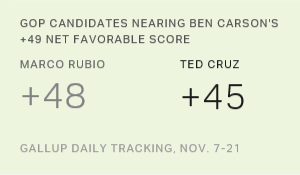