Long the GOP's most popular presidential candidate, Ben Carson finds himself now sharing that coveted spot with two quickly ascending rivals: Marco Rubio and Ted Cruz. Carson's net favorable rating -- the difference between the share of Republicans who say they have a favorable opinion of him and those who have an unfavorable view -- stands at 49 for the latest two-week rolling average as measured by Gallup's Daily tracking. Rubio and Cruz are virtually tied with Carson; Rubio's score is 48, while Cruz has a 45. Both Rubio and Cruz -- two candidates who were widely perceived as doing well in the combative third GOP presidential candidate debate on Oct. 28 as well as in the more reserved fourth faceoff on Nov. 10 -- are seeing significant improvement in their net favorable scores compared with late October/early November. Carson, by contrast, has seen his net favorable score drop 11 points from the 61 he registered over Oct. 24-Nov. 6. After an eventful, if sometimes rambunctious, period of campaigning over the summer and fall, the GOP presidential race may shift into a lower gear this week as Americans usher in the holiday season with Thanksgiving. The final Republican debate of 2015 will be held on Dec. 15 in Nevada.

For some candidates, most especially Carson, this respite may in and of itself be something to be grateful for. The successful neurosurgeon -- and political neophyte -- appears to be coming down from his higher levels of popularity in the last two weeks as his campaign has been roiled with a number of public relations challenges, and his current net favorable score of 49 is down significantly from his campaign high of 61 achieved in early November.

And while Carson's popularity has slumped, Rubio and Cruz, after months of gaining little traction among Republicans, have seen their stock rise. Rubio, now statistically tied with Carson for the title of best-liked GOP candidate, was judged by many in the press and political class to have registered an especially strong debate performance in the Oct. 28 contest. Cruz is also now experiencing a jolt of warm impressions from the Republican faithful after months during which he appeared to gain little traction in terms of improving his image. For Cruz, the third debate may have been an important turning point. Cruz criticized the CNBC panel moderating the debate and extended his critique to the media at large. This, no doubt, resonated with the Republican faithful; Gallup has repeatedly found that Republicans are very unlikely to say they have a great deal or a fair amount of confidence in the mass media. Cruz now has the highest net favorable score since Gallup began tracking in mid-July.

While still far behind other candidates in terms of popularity, Christie continues to see steady progress in his image. For the two-week rolling average of Nov. 7-21, as noted, Christie scored a net favorable rating of 26, his highest score since Gallup began tracking, and a remarkable turnaround for a candidate who, at times, had a net-negative image among Republicans.

The period from now through the end of the year marks two major holidays -- sandwiching the Dec. 15 debate -- and the likely-waning of attention paid to the GOP primary. Following the turn of the year, many candidates will likely turn up the volume on their campaign as the Feb. 1 Iowa caucus quickly approaches. 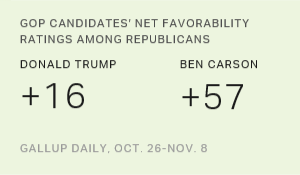