PRINCETON, N.J. -- Thirty percent of Americans say the presidential election process is working as it should, down from 37% in January. The decline is driven mainly by Republicans' increasingly cynical views as the campaign season has progressed. The percentage of Republicans and Republican-leaning independents who say the election process is working has fallen from 46% to 30% since January. Democrats' and Democratic leaners' views haven't changed.

The latest update, based on interviewing conducted March 16-17, shows that Republicans and Democrats now have similarly low levels of belief that the election process is working properly, based on their views of the way the presidential campaign is being conducted. This situation differs from what Gallup found in January, when Republicans were much more positive. Since then, the GOP field has narrowed substantially from a large number of candidates to the three still in the race -- Donald Trump, Ted Cruz and John Kasich. And the lion's share of attention is going to the controversial Trump, the clear front-runner at this point. By contrast, Hillary Clinton and Bernie Sanders have remained the two main Democratic candidates all year.

It is unclear from the data if partisans are reacting to the developments in their own party's nomination race, the other party's nomination race or both. Republicans' increasingly dour sentiments may be related to Trump -- either the increasing inevitability that he will gain his party's nomination, or the way controversial aspects of his campaign have dominated the news. Trump is the least popular Republican nominee among members of his own party in recent elections going back to 1996, and he is much less well-liked than Hillary Clinton is among Democrats. Democrats' more stable but still cynical views may be based on their views of what is happening on the GOP side, or they may not be pleased with something about their own party's campaign.

Another factor could be the increasingly contentious campaigns, particularly on the Republican side, where personal attacks have been an almost daily occurrence and violence between supporters and protestors has broken out at some Trump rallies.

Gallup asked the election-process question on a limited basis during the 2000, 2008 and 2012 election cycles. The high point in positive reactions came in January 2008, when 67% answered affirmatively. That was an open-seat election year, with a particularly well-liked Barack Obama battling Hillary Clinton for the Democratic nomination, and John McCain and Rudy Giuliani among a large field running for the Republican nod.

A majority of Americans were also positive about the process in January and March 2000, another open-seat election year, when the two parties' nominees -- Al Gore for the Democrats and George W. Bush for the Republicans -- were already the clear front-runners. The most cynical response before this year was measured in December 2011, when Barack Obama was running for re-election and the fight for the GOP nomination was underway.

And although the percentage of Americans who say the election process is working has dropped, views that there is at least one good candidate running are stable and generally in line with what Gallup has found in previous election years.

Republicans' views about there being a candidate running who would make a good president have stayed relatively constant since January, while Democrats have become modestly more positive. Democrats are now more likely than Republicans to say a good candidate is running, 78% vs. 69%, respectively.

A recent March 17-20 New York Times/CBS News survey found that 60% of Republican registered voters say the Republican presidential campaign has made them feel mostly embarrassed by the Republican Party rather than mostly proud. In the same poll, only 13% of Democratic registered voters said they were mostly embarrassed about their party's campaign. These findings support the hypothesis that Republicans' views that the campaign is not working properly are being driven by their negative views of the candidates' campaigns, most likely related to Trump. Republican establishment leaders' attempt to prevent Trump from getting the GOP nomination may be adding to rank-and-file Republicans' views that the process is not working, either because they support or because they oppose these efforts. House Speaker Paul Ryan said earlier this week, "Looking around at what's taking place in politics today, it is easy to get disheartened," and apparently many Republicans may agree.

Results for this Gallup poll are based on telephone interviews conducted March 16-17, 2016, on the Gallup U.S. Daily survey, with a random sample of 1,012 adults, aged 18 and older, living in all 50 U.S. states and the District of Columbia. For results based on the total sample of national adults, the margin of sampling error is ±4 percentage points at the 95% confidence level. All reported margins of sampling error include computed design effects for weighting. 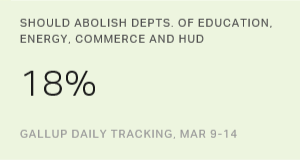