PRINCETON, N.J. -- Forty-six percent of Americans now identify politically as Democrats or say they lean Democratic, while 40% identify as Republican or lean Republican. As recently as October, the parties had equal levels of support. The six-percentage-point Democratic advantage in party loyalties in Gallup Daily tracking throughout March is one of the larger leads for the party during Barack Obama's second presidential term. Democrats have held a seven-point lead over Republicans on three occasions during this time, including January 2013, the month of Obama's second inauguration; October 2013, during the partial federal government shutdown; and April 2015, as the 2016 presidential field was beginning to take shape and Hillary Clinton was the best-known, and best-liked, candidate.

These results are based on monthly averages of Gallup Daily tracking data, including more than 13,000 interviews each month. Each night, Gallup asks Americans whether they identify politically as Democrats, Republicans or independents. Independents are subsequently asked if they lean more toward the Republican or Democratic Party. Party "leaners" usually share similar attitudes and behaviors to those who identify outright with the party. Consequently, the combined percentage of party identifiers and leaners gives a sense of the relative strength of each party within the U.S.

The recent shifts toward, and away from, the GOP may reflect the twists and turns in the presidential campaign. As Clinton became embroiled in a controversy over storing classified government communications on a private server last spring, her image suffered. Meanwhile, Donald Trump's presence in the campaign, a GOP contest with a large field of 17 candidates, and widely viewed television debates offered a great deal of publicity for the party. But the large field also created greater uncertainty about the likely outcome than the Democratic contest in which Clinton was regarded as the clear front-runner, notwithstanding Bernie Sanders' spirited challenge.

In August, September and October, the parties were tied in party affiliation, at 42%.

Since then, particularly in the past two months as Trump and his GOP challengers have frequently resorted to personal attacks in debates, at campaign rallies and on social media, Americans' party loyalties have shifted, giving the Democratic Party a clear advantage. Republicans are also facing the real possibility that no candidate will emerge from the contentious nomination campaign with the majority of delegates needed to ensure his nomination, thus leaving the ultimate choice of the nominee to convention delegates.

Amid the presidential campaign, a time when latent party loyalties are activated given the intense focus on political matters, Obama's job approval rating has improved. Last week, an average of 53% of Americans approved of the job Obama was doing, his highest weekly average since late January/early February 2013. Obama's rising popularity could also be a factor in Americans' greater likelihood of aligning with the Democratic Party.

Democrats' current six-point edge in party affiliation gives them strong positioning heading toward this fall's election. Given that Republicans tend to vote at higher rates than Democrats, a bigger advantage in basic party loyalties gives Democrats more of a cushion if their turnout fails to match or approach that of Republicans.

The Democratic lead in party affiliation was smaller than it is now in the months preceding the 2012 election, ranging from two to four percentage points. But it pales in comparison to the double-digit advantages it held in 2008, which grew even larger after Obama won the election.

If the GOP nomination is settled in a way that doesn't ignite further controversy, Republicans may gain back some of the support the party has lost, particularly considering the numerous shifts in party affiliation over the past 12 months. But at this point, with neither party nomination settled and Election Day still seven months away, Democrats hold the upper hand.

Results for this Gallup poll are based on telephone interviews conducted March 1-31, 2016, on the Gallup U.S. Daily survey, with a random sample of 15,253 adults, aged 18 and older, living in all 50 U.S. states and the District of Columbia. For results based on the total sample of national adults, the margin of sampling error is ±1 percentage point at the 95% confidence level. All reported margins of sampling error include computed design effects for weighting. 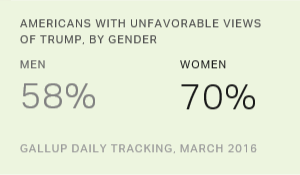 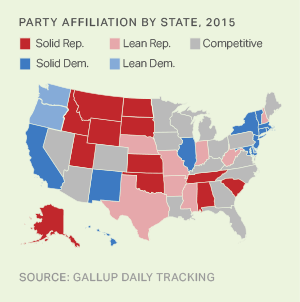