PRINCETON, N.J. -- Half of Americans say they have "a great deal" or "a fair amount" of confidence in President Barack Obama to do or to recommend the right thing for the U.S. economy, generally similar to the readings through most of his presidency. Americans expressed more confidence in the president in 2009 (71%) and 2013 (57%), the first years of his first and second terms, and less confidence in him in 2014 (42%). The results are based on Gallup's April 6-10 Economy and Personal Finance poll. Gallup has asked the same question each April throughout Obama's eight years as president. An average of 53% of Americans over that period have expressed confidence in Obama's ability to manage the economy. That is similar to the 54% average from 2001 to 2008 for George W. Bush, the only other president about whom Gallup has asked this question. Bush's ratings varied more over the course of his presidency. Two-thirds or more of Americans were confident in him during the first three years of his presidency -- a time when Bush had high job approval ratings after the 9/11 terrorist attacks -- and just 34% were confident in his final year as the nation was in an economic recession.

Confidence in Obama is strongly related to one's party identification, as 86% of Democrats but only 14% of Republicans trust the president to do the right thing for the economy. Forty-six percent of independents are confident in Obama's economic leadership.

Americans Split as to Whether They Trust Yellen

Arguably the second-most important economic leader in the U.S. after the president is the chair of the Federal Reserve Board. Janet Yellen has held that post since February 2014, but one in four Americans still do not know her well enough to say whether they are confident in her ability to do the right thing for the economy. Currently, 38% have a great deal or fair amount of confidence in her, 35% say they have "only a little" or almost no confidence and 26% do not have an opinion.

Confidence in Yellen has been roughly 40% during her tenure, while the percentage expressing no confidence has varied between a high of 43% in 2014 and a low of 31% last year. Yellen's 38% average rating thus far is slightly lower than former Fed Chair Ben Bernanke's 44% average from 2006 through 2013, partly because Bernanke was better known than Yellen is. Bernanke's predecessor, Alan Greenspan, averaged a 65% confidence rating over the last five years of his chairmanship. Greenspan was much better known than either of his successors and presided over the Fed during a time when the economy was generally strong.

Despite their lack of familiarity with her, Republicans are much more likely to say they are confident in Yellen (37%) than in Obama (14%). Fifty-two percent of Democrats express confidence in the Fed chair.

Majority Do Not Trust Democratic Leaders in Congress

There have been several times when a majority of Americans were confident in Democratic leaders, including 2001 through 2003 when ratings of government leaders tended to be higher because of the strong economy and post-9/11 rally effect; in 2007 after Democrats became the majority party in Congress; and in 2009 after Obama's election as president. 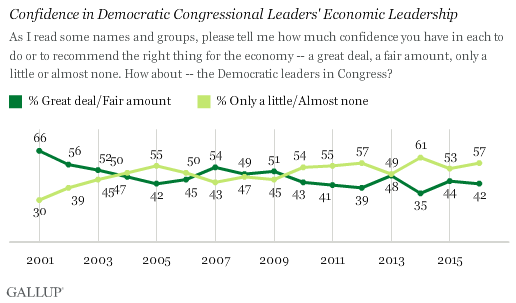 Americans are significantly less confident in the economic stewardship of Republican leaders in Congress than in Democratic leaders, with 33% saying they are confident in GOP congressional leaders. That represents a slight decline from 38% last year but is above the 2014 low point of 24%. A majority of Americans were confident in Republicans from 2001 through 2003, but since then, the percentage has held below 50%, including only two readings above 40% since 2008. Of the four major federal leaders or groups of leaders responsible for economic policy, Americans are most likely to say they are confident in Obama. His higher confidence rating is partly related to Americans' lack of familiarity with Yellen and their generally negative views of Congress as an institution.

Apart from the strong 71% rating Americans gave Obama during the honeymoon phase of his presidency, their confidence in him to manage the economy has not varied a great deal during his presidency. This is the case even though Americans' assessments of the U.S. economy have improved over the past seven years. Given the large partisan gap in Obama's confidence ratings, these may be rooted more in fundamental agreement or disagreement with the president's approach to economic policy than on how the economy is doing on his watch.

Americans Trust Obama Most on Economy

Americans put more confidence in President Obama to do the right thing for the U.S. economy than in Fed Chairman Ben Bernanke and Democratic and Republican leaders in Congress. Americans' confidence in Obama is up from last year.