PRINCETON, N.J. -- Presented with three separate scenarios for the future of the Affordable Care Act (ACA), 58% of U.S. adults favor the idea of replacing the law with a federally funded healthcare system that provides insurance for all Americans. At the same time, Americans are split on the idea of maintaining the ACA as it is, with 48% in favor and 49% opposed. The slight majority, 51%, favor repealing the act.

Gallup included these three questions in its interviewing on May 6-8 to provide insight into how Americans might react to the three remaining presidential candidates' proposals for dealing with the ACA. Bernie Sanders calls for replacing the ACA with a single-payer, federally administered system that he calls "Medicare for All." Donald Trump has said he would repeal the ACA, and Hillary Clinton generally says she would keep the ACA in place. Americans were asked in the survey to react to each of these proposals separately, and there was no mention of the candidates in the question wording.

The results show that many Americans are OK with several ways of handling the ACA rather than favoring only one possibility. In particular, 35% of all Americans say they would favor keeping the ACA in place and separately say they favor the idea of replacing it with a federally funded universal health insurance system. Among Democrats and Democratic leaners, 59% favor both of these approaches. In short, many Americans would apparently go along with Clinton's idea of keeping the ACA in place as it is now, or with Sanders' bolder proposal to replace it with a Medicare-for-All system.

Gallup also asked those who favor either keeping the ACA in place or replacing it with a federally funded system to choose between these two options. The federally funded system wins among this group by a 2-to-1 ratio, 64% to 32%, meaning this system garners the most support among the initial favor/oppose questions and wins when those who like both approaches are forced to choose.

Additionally, 27% of Americans say they favor repealing the ACA and say they favor replacing it with a federally funded system. This means the group of Americans in this survey who favor the law's repeal, a core policy proposal of many Republican presidential candidates during this campaign season, includes some who apparently want the ACA repealed to replace it with an even more liberal system. Only 22% of Americans say they want the ACA repealed and do not favor replacing it with a federally funded system.

One notable exception to the strong partisan skew in reactions to these proposals comes from Republicans when they are asked about replacing the ACA with a federally funded system. Forty-one percent of Republicans favor the proposal -- much higher than the 16% who favor keeping the ACA in place. This may reflect either that Republicans genuinely think a single-payer system would be good for the country, or that they view any proposal to replace the ACA ("Obamacare") as better than keeping it in place.

Approval of the ACA and What Should Be Done About It

Responses to other questions included in the May 6-8 survey show that Americans remain split in their overall views of the ACA, with about as many approving as disapproving of the law. Almost nine in 10 of those who approve of the ACA in general subsequently say they would favor keeping it in place, which is logical. But 72% of those who approve of the ACA also would favor replacing it with a single-payer federally funded health system. This reinforces the idea that ACA supporters can agree simultaneously with several different ways of dealing with this law.

Additionally, Americans have been more positive than negative in two previous Gallup measures of the idea of a single-payer federally funded system, although when given a chance to say so, a sizable percentage of Americans say they don't know enough about it to have an opinion.

The current survey used shorthand descriptions to describe the alternatives for dealing with the ACA, and it's possible that not everyone understands the implications of each approach. Instituting a universal healthcare system, in particular, would be one of the most significant overhauls of a major part of American life in modern U.S. history, and would create huge consequences and challenges. Additionally, other research shows that when given a choice, Americans are philosophically more inclined to favor a private healthcare system than one run by the government. Americans are generally satisfied with their personal healthcare, something that also could slow down the process of adopting a major overhaul of the healthcare system. Still, the general idea of a single payer system seems to play well with the majority of Americans, something both the presumed Democratic nominee Clinton and the Republican nominee Trump will need to keep in mind as they debate healthcare in the months to come.

Results for this Gallup poll are based on telephone interviews conducted May 6-8, 2016, on the Gallup U.S. Daily survey, with a random sample of 1,549 adults, aged 18 and older, living in all 50 U.S. states and the District of Columbia. For results based on the total sample of national adults, the margin of sampling error is ±3 percentage points at the 95% confidence level. All reported margins of sampling error include computed design effects for weighting. 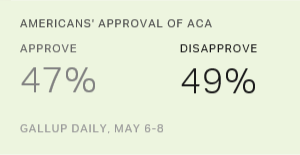 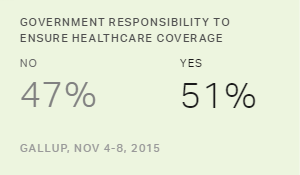