WASHINGTON, D.C. -- Three in four Americans are giving "quite a lot" of thought to the upcoming presidential election, a possible sign of high voter turnout this November. In the 2008 presidential campaign that produced the highest voter-turnout percentage in 40 years, a late-May poll showed a level of interest similar to this year's. In the lower-turnout 2000 and 2004 elections, smaller percentages said in May that they had given quite a bit of thought to the election.

Fewer than half of Americans in May 2000 were paying a lot of attention to that year's presidential election, and the turnout reflected the lack of interest. About half of eligible voters (51.2%) cast a ballot, the third-lowest turnout rate (ahead of 1996 and 1988) since 1924.

Democrats and Republicans Giving More Thought to Election Than in January

The current level of thought Americans are giving to the election is significantly higher than before the first presidential primaries in February. Seventy-nine percent of Republicans, including independents who lean Republican, now say they have given quite a lot of thought to the election, up from 70% in January. Democrats and Democratic leaners are also more likely to say they are thinking about the election: 72% say "quite a lot" now, up from 63% in January.

Republicans are more likely than Democrats to say they are following the race closely, continuing a pattern seen in previous campaigns. Even in the final days of the Democratic victories in the 2008 and 2012 presidential elections, Republicans were more likely than Democrats to say they were thinking about the election quite a lot. Republicans also are following election news more closely, according to a May 13-15 Gallup poll.

Though Americans are giving a lot of thought to the election, they are split on whether they are more enthusiastic (46%) or less enthusiastic (48%) about voting this year compared with prior election years. The only time Gallup asked this question in May or June of a presidential campaign year was during the high-turnout 2008 election. In a June 15-19 poll that year, about the same percentage (48%) said they were more enthusiastic as said so this year, but significantly fewer (37%) said they were less enthusiastic.

There have been three other notable shifts in enthusiasm from 2008 to now:

Enthusiasm could grow in both parties. With the interparty battles of the primary season ending, the parties can switch their emphasis to healing internal wounds and attacking the other party's nominee. The fall campaign may also help energize voters in both parties -- in the last three presidential election years, enthusiasm within the parties tended to peak in the month before the election.

It is no surprise that a campaign with two heated battles for party nominations, each dominated by a candidate who has been among the nation's best-known public figures for decades, has drawn the attention of most Americans. It also is no surprise, with both Clinton and Donald Trump holding unusually high unfavorable ratings, that nearly half of Americans say they are less enthusiastic than usual about voting. Both nominees face the dual challenges of winning back support within their own party from campaign opponents and those opponents' supporters as well as improving their images with the general public.

The 2016 election has Americans pondering their choices with a focus similar to that of the high-turnout 2008 campaign, but there is a fundamental difference. Fewer than four in 10 Americans have a favorable view of either Clinton or Trump. At the beginning of June 2008, 58% viewed eventual Democratic nominee Barack Obama favorably, and 56% held that view of presumptive Republican nominee John McCain.

With the public engaged by the campaign but not favorably disposed toward the two major-party candidates, it is unclear whether high interest in the election will result in high turnout, or whether the current low regard for the candidates will lead to low turnout in November. Turnout may depend on the extent to which the candidates can change the public's views of them and can turn animosity toward their opponent into turnout at the polls for themselves. 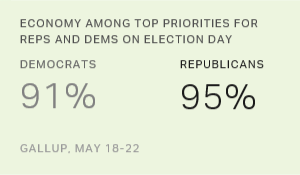 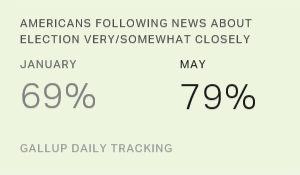