For the past 15 years, Gallup has asked Americans to rate the moral acceptability of different issues. Of the 19 issues included in this year's survey, a majority of Americans view 11 as morally acceptable. Americans' willingness to describe many issues as morally acceptable has grown since 2001, namely for gay or lesbian relations, having a baby outside of marriage and sex between unmarried people. On other issues, including abortion, cloning animals and wearing clothing made of animal fur, there has been little to no change in the past 15 years. On a year-to-year basis, Americans' views of the moral acceptability of any of these issues have not changed much since 2015.

Birth control is the issue that the largest percentage of Americans approve of, with 89% deeming it morally acceptable. Eight others -- ranging from divorce to medical research using stem cells obtained from human embryos -- fall into the "largely acceptable" category, with solid majorities rating them as morally OK. Americans are split on three issues in the "contentious" category: medical testing on animals, doctor-assisted suicide and abortion.

There are some key differences in how partisans view these moral issues. Democrats are more likely than Republicans to deem sex between an unmarried man and woman as acceptable, along with having a baby outside of marriage and abortion. Republicans, on the other hand, are more likely than Democrats to believe the death penalty is acceptable, as well as to support buying and wearing clothing made of animal fur and medical testing on animals.

Americans broadly agree on the moral acceptability of several prominent social issues. Most consider birth control and divorce as OK, while the vast majority disapprove of polygamy, cloning humans and extramarital affairs. Although polygamy and cloning humans have seen increases in acceptability in recent years, more than 80% of the public still oppose them.

Gay or lesbian relations, having a baby out of wedlock and sex between unmarried men and women have seen substantial increases in public acceptance since Gallup began asking about them, but issues such as the death penalty and medical testing on animals have seen declining acceptance. In general, in the 21st century, Americans believe more key issues are morally acceptable than they used to, consistent with other trends toward greater social liberalism. 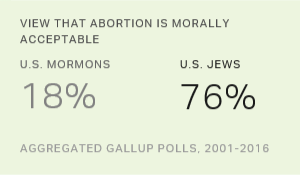 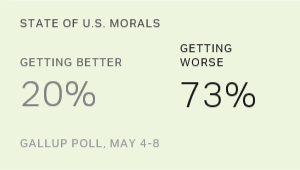 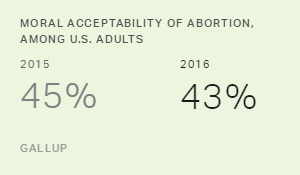