Americans' perceptions of the U.S. job market bottomed out after the Great Recession but steadily rebounded from 2012 to 2014, reaching a recent high of 45% in January 2015. Since then, the percentage saying now is a good time to find a quality job has hovered around 40%, similar to levels seen in 2006 and 2007.

The latest Bureau of Labor Statistics employment report released on June 3 raised concerns about the health of the job market. That report came out while the latest update on Gallup's quality job question was in the field from June 1-5. An analysis of responses by day of interview shows that Americans were just as positive about the job market after the report's release as they were before it.

Views of the job market vary significantly by employment status. While half of employed Americans (51%) say it is a "good time" to find a quality job, only a third of adults who are not currently working (33%) say it is a ripe time for job seekers.

In 2013, employed and unemployed adults' views of the job market were similar. Both working and nonworking adults have grown more optimistic about the job market, but confidence has picked up much more among the employed. Confidence in the job market also varies by subgroup within the category of those who are employed. Full-time employed Americans are much more likely than part-time employees to say it is a good time to find a quality job, 50% vs. 39%, respectively. These data are based on combined responses from 2015 and 2016 so far.

Students (51%), who may expect to land a job upon completion of their education, seem to share the same optimism for the job market as those who already have a full-time job. Meanwhile, 36% of unemployed job seekers say it is a good time to find a job.

Optimism is lower among other nonworking adults, including the retired (31%), disabled (29%) and the unemployed who are not actively looking for a job (28%).

The dismal BLS employment report for May seems to have done little to shake Americans' views about the job market, with the percentage of Americans saying it is a good time to find a quality job being on the higher end of Gallup's trend since 2001.

Americans' improving outlook for the job market since 2013 has primarily been influenced by employed adults, with those having a full-time job, along with students, the most optimistic about the job market. Americans who have not found full-time employment -- including those who are working part time and those who are unemployed and looking for work -- are somewhat less positive about the market. To some degree, then, Americans' own employment status shapes their perceptions of the U.S. job market. 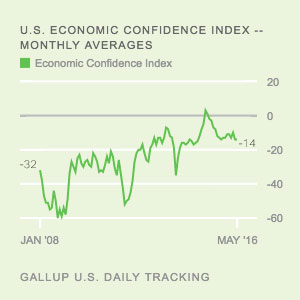 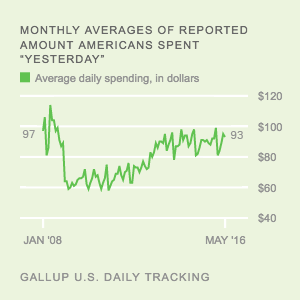 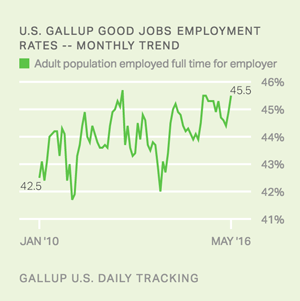