The increase in reports of credit card information theft come at a time when both Visa and MasterCard are aggressively replacing magnetic-stripe credit cards as a way to protect information from hackers. The replacement cards use a chip that generates a unique code for every transaction. Both credit card companies have more than doubled the number of chip-enabled cards in the last year, with MasterCard reporting in July that 88% of their consumer credit cards have the chip.

Things are not moving as swiftly among U.S. businesses. About a third of U.S. stores were able to process chip transactions in August, according to Visa. The National Retail Federation, which has complained the cards are "cumbersome" and do not provide enough security, contends that card companies' slowness in signing off on chip-reading terminals has been a major factor in the delays.

Theft of credit card information is the crime most Americans have in common, but it is much more of a problem for high earners and those aged 35 to 54. At least part of the reason for the discrepancy between high and low earners is that those in higher income brackets are much more likely to have credit cards. In a 2014 Gallup poll, 88% of those with annual household incomes of $75,000 or more said they had at least one card, compared with 41% of those with incomes of less than $30,000. Nearly three in four of those in the $30,000-$74,999 income bracket said they had a card. Among age groups, about half of those under 35 had a credit card, and about three-fourths of those 35 and older had one.

Concerns about hacking have produced a worldwide transition to machines that accept chip-enabled cards. The pressure on businesses in the U.S. ratcheted up last year on Oct. 1 when merchants without chip-reading terminals became liable for fraudulent transactions from counterfeit cards.

At this point the changes taking place in the U.S. have neither allayed the fears of consumers that their credit card information will be stolen nor reduced the percentage of Americans saying their households have been victimized.

As differences between merchants and credit card companies are resolved, a broader rollout of chip-reading terminals in U.S. businesses could bring a drop in credit card information theft and a subsequent lessening of worries about the crime. 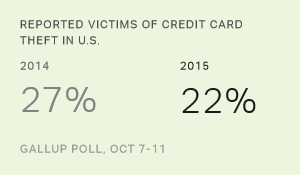 Fewer Americans today than in 2014 say the credit card information they have used at stores was stolen by hackers, and fewer say they are highly worried about credit card theft than were worried in 2014. 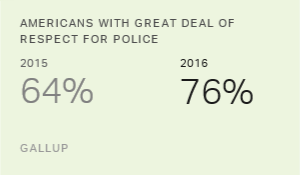