WASHINGTON, D.C. -- In 2016, an average of 42% of Americans said it was a good time to find a quality job. This matches the average for 2015, signifying that optimism about the job market has leveled off after rising steadily since 2012. Gallup began measuring Americans' assessments of the job market in 2001. In 2007, a record-high 43% of Americans, on average, said it was a good time to find a quality job. Beginning in 2008, as the Great Recession took hold, Americans' perceptions of the health of the job market began a steep decline.

The latest monthly reading from a Dec. 7-11 Gallup poll shows 43% of Americans are optimistic about the job market, similar to the 42% average for the entire year. Optimism about the job market among Republicans and Democrats has shifted since the presidential election.

In October 2016, before the election, 26% of Republicans and Republican-leaning independents said it was a good time to find a job. That figure increased to 34% in November and held steady in December at 35%, a 2016 high for this group.

On the other hand, optimism about the job market has dwindled among Democrats and Democratic-leaning independents. In October, before the election, 56% of Democrats said it was a good time to find a quality job. This figure fell to 51% in November and 49% in December, down significantly from its 2016 peak of 58% in January. Although Democrats' optimism currently sits below levels recorded just before the election, it remains higher than April's low of 47%. Despite the unemployment rate being at or below 5% throughout 2016, Americans' overall optimism about the U.S. job market leveled off this year. This occurred even as economic confidence improved in late 2016 and the percentage of Americans mentioning the economy as the most important problem facing the country fell to its second-lowest level since 2008.

President-elect Donald Trump has promised to create millions of new jobs once he takes office, and Gallup's quality jobs metric will be a good indicator of whether Americans believe he is succeeding in keeping that promise. 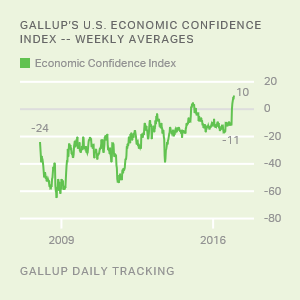 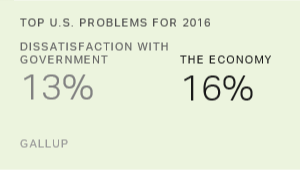 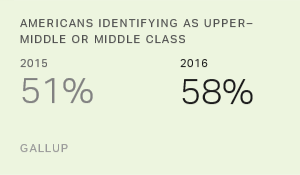