WASHINGTON, D.C -- Americans' reactions to the inaugural ceremonies for Donald Trump were more positive than negative. Thirty-nine percent say they are more hopeful about the next four years based on what they saw, heard or read about Friday's inauguration, 30% are less hopeful, and 30% say what they heard or read made no difference. That reaction is similar to what Gallup measured for George W. Bush's and Barack Obama's second inaugurations, but much less positive than it was for Obama's first.

Gallup conducted a one-night reaction poll Friday night after Trump was inaugurated as the nation's 45th president earlier that day, just as it had done immediately after the 2005, 2009 and 2013 inaugurations.

Reactions to Trump's ceremonies are predictably partisan, though Republicans had stronger reactions than Democrats did. Seventy-eight percent of Republicans, including Republican-leaning independents, say they are more hopeful about the next four years after the inaugural ceremonies. In contrast, 56% of Democrats and Democratic leaners are less hopeful about the next four years; 36% say it makes no difference.

Many More Americans Tuned in to Obama's First Inauguration Than Trump's

Forty-six percent of Americans reported watching the 2017 inaugural ceremonies as they happened, fewer than the 60% who did so for Obama's first inauguration in 2009. The percentage watching Trump's ceremonies exceeded those for Bush's (40%) and Obama's (38%) second inaugurations.

The viewing audience for Trump's inauguration was decidedly more Republican than Democratic -- 61% of Republicans and Republican leaners said they watched the events as they happened, compared with 35% of Democrats and Democratic leaners. That pattern of the president's party members being more attentive to the coverage has been the case in each of the last four inaugurations, but the party gap in viewership was smaller in 2005 and 2009 than in the last two. In 2009, majorities of both parties reported watching the ceremonies, perhaps given their historic significance with Obama becoming the first African-American president.

A slight majority of Americans who saw the ceremonies or news coverage of them, 53%, gave Trump's inaugural address a positive review -- rating it as either "excellent" or "good." Twenty percent rated it negatively -- as either "poor" or "terrible" -- with the remainder saying it was "just okay."

Americans who had viewed or seen news coverage of the three prior inauguration ceremonies rated those inaugural addresses more positively, including 65% excellent/good ratings for Obama's speech in 2013, 81% for Obama's 2009 address and 62% for Bush's 2005 speech. Negative evaluations of Trump's inauguration speech are higher than for the most recent addresses.

The vast majority of Republicans who saw inauguration coverage, 87%, rated Trump's speech positively, compared with 15% of Democrats. Close to half of Democrats and Democratic leaners, 46%, gave his speech a negative review.

While not quite the home run Obama's first inauguration was, Trump's inauguration was not much different than other recent inaugurations in terms of making Americans more hopeful about the coming four years. This is the case even though Trump's speech got less positive reviews than prior inaugural addresses from those who watched the inauguration ceremonies or saw news coverage of them.

The more positive than negative reaction to Trump's inauguration, based on a measure of how hopeful it made Americans about the next four years, is notable given that the public held Trump in much lower esteem than prior presidents-elect. His final pre-inauguration favorable rating of 40% is also lower than those for Obama (58%) and Bush (60%) before their second inaugurations.

Trump will still likely have a lot of ground to make up to match the public good will enjoyed by prior presidents in the early stages of their presidency. But the inauguration seems to have done more to help Trump than to hurt him in closing that gap. However, since the good feeling coming out of the inauguration is predominantly from his natural political allies, Republicans and Republican-leaning independents, and less from his natural opponents, the gap may not be fully closed unless and until Democrats' strong negative feelings toward him subside.

Results for this Gallup poll are based on telephone interviews conducted Jan. 20, 2017, on the Gallup U.S. Daily survey, with a random sample of 508 adults, aged 18 and older, living in all 50 U.S. states and the District of Columbia. For results based on the total sample of national adults, the margin of sampling error is ±5 percentage points at the 95% confidence level. All reported margins of sampling error include computed design effects for weighting. 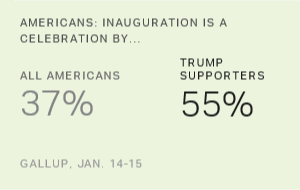 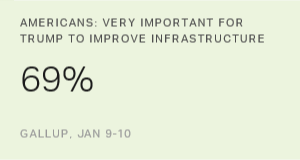 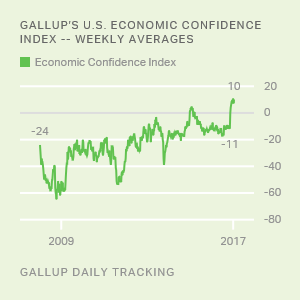