WASHINGTON, D.C. -- Wyoming, North Dakota and Mississippi are the most right-leaning states in the nation, with self-identified conservatives in each state outnumbering self-identified liberals by more than 30 percentage points. Vermont is the most liberal state, with liberals outnumbering conservatives by 14 percentage points, followed by Massachusetts, Connecticut and New York.

The mostly leftward movement on ideology since 2009 contrasts with the movement on partisanship since then, which has been all in the Republican direction.

The geographic distribution of ideology follows the red-blue voting pattern evident in recent elections. The most conservative states are all located in the South (Mississippi, Alabama, Louisiana, Arkansas, Tennessee and South Carolina), in the Mountain West (Utah, Wyoming and Idaho) and in the Great Plains (North Dakota and South Dakota), with Oklahoma straddling the Great Plains and Southern regions. The most liberal states are all located on the East and West Coasts -- in New England (Vermont, Massachusetts, Connecticut and Maine), the Middle Atlantic (New York and Maryland) and the far West (Washington, California, Oregon and Hawaii). Residents in most U.S. states tilt more conservative than liberal -- although as is the case for the country as a whole, this conservative advantage has narrowed in many states with the rising number of Americans identifying as liberals.

What it means to be a conservative and a liberal, of course, can vary significantly among those choosing these broad labels. Many Americans can be conservative or liberal on social issues while holding opposite views on economic issues. But the basic ideological labels are useful in picking up political trends, and in general, the most conservative states are also those that lean Republican in terms of residents' party identification and that tend to vote for Republican presidential candidates. Along these same lines, the regional variations in ideology provide further evidence of the persistent geographical nature of politics in the U.S. today.

Results for this Gallup poll are based on telephone interviews conducted Jan. 2-Dec. 30, 2016, on the Gallup U.S. Daily survey, with a random sample of 177,788 adults, aged 18 and older, living in all 50 U.S. states and the District of Columbia. Margins of error for individual states are no greater than ±6 percentage points and are ±3 percentage points in most states. All reported margins of sampling error include computed design effects for weighting. 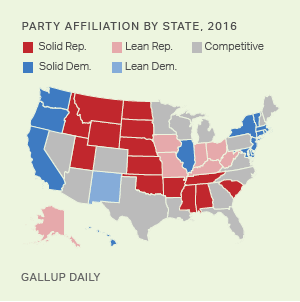 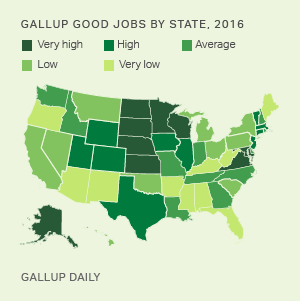 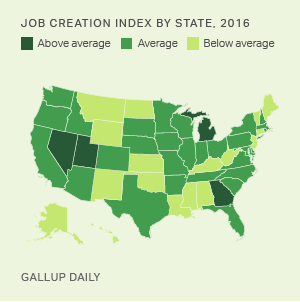