WASHINGTON, D.C. -- Majorities of Americans believe President Donald Trump keeps his promises, is a strong and decisive leader, and can bring about changes the country needs. Trump scores worse on other characteristics and qualities: Less than half of Americans perceive him as honest and trustworthy, able to manage the government effectively, inspiring confidence and caring about the needs of people like themselves.

These results are based on Gallup interviewing conducted Feb. 1-5, updating Americans' views of Trump on seven presidential qualities and characteristics, including five that Gallup assessed during the presidential campaign.

The characteristics that Americans are most likely to say apply to Trump clearly reflect the key message of his inaugural address and his actions since taking office over three weeks ago. He made a large number of promises during his presidential campaign, and Americans give him the most credit for following through on those promises. His series of executive orders and Cabinet appointments show a president who is decisive and trying to bring about change, also qualities that a majority of Americans (59% and 53%, respectively) say apply to him.

Americans are, however, less positive about his honesty -- echoing views that plagued both him and Democratic nominee Hillary Clinton during last year's campaign -- and majorities are not convinced that he is able to manage the government effectively, that he inspires confidence or cares about the needs of "people like you."

Notably, Trump's job approval rating was 42% at the time of the Feb. 1-5 poll, meaning the credit the public gives Trump for possessing several of these qualities doesn't necessarily translate into broad approval of the way he is performing his job as president.

Gallup has measured these qualities and characteristics for previous presidents but has typically done this further into their presidencies, making comparisons at this point difficult.

There are, however, five parallel measures from early February 2001 for George W. Bush, the last Republican president before Trump. Bush fared better than Trump on four of the five -- not surprising, given that Bush's job approval and favorable ratings were higher than Trump's in the initial weeks of the two men's presidencies. The exception is "strong and decisive leader," a relative Trump strength, which about as many Americans say applies to Trump now as said applied to Bush then.

Large majorities of Republicans and Republican-leaning independents say all seven characteristics apply to Trump, ranging from 94% who say he is a strong and decisive leader, to 81% who say he inspires confidence and is honest and trustworthy. Democrats and Democratic leaners are much less positive in general, but, on a relative basis, are most likely to say that Trump keeps his promises -- 36% say this applies. Also, 29% of Democrats believe Trump is a strong and decisive leader, and 20% say he can bring about the changes the country needs. Thirteen percent or less say the other four characteristics apply to Trump.

In this same poll, 4% of Democrats and leaners say they approve of the overall job Trump is doing, underscoring the finding that some Democrats see Trump as strong on certain dimensions even while disapproving of his performance overall.

The two partisan groups show a slightly smaller gap in terms of believing that Trump keeps his promises, while the biggest gap is in terms of caring about the needs of "people like you." Still, these are relative differences; the general pattern is one of significantly different partisan views on all of the measures. Republicans have become more positive about Trump generally since the election, and one would expect that they would also become more positive about him on these specific qualities -- as they have. Gallup measured Trump on five of these characteristics before the election, and Republicans are more likely to say each of these applies to Trump now than they were five months ago. Democrats' pre-election ratings have generally stayed the same or edged slightly lower since he became president.

The exception to this trend is the measure of Trump's perceived ability to bring about needed change. The percentage of Democrats and Democratic-leaning independents who say Trump can bring about change has increased from 9% to 20% since September; for Republicans and leaners, the increase is 18 percentage points (from 75% to 93%). While on an absolute basis these Democratic views are still low, the 11-point jump is the only statistically significant increase for Democrats out of the five qualities with trends.

Trump begins his presidency with a majority of the public believing that he keeps his promises, is a strong leader and can bring about needed changes. These traits fit well with his steady stream of sometimes controversial executive orders that have reflected what he said he would do during his campaign, continuing to exemplify a "bull in the china shop" style and persona.

At the same time, Americans' acknowledgment of Trump's dynamic leadership style and keeping his promises has not translated into the same level of overall approval of his performance as president, either because of these style considerations or because Americans disagree with the substance of his policy decisions. Overall, it appears that one of Trump's most significant challenges will be to convince Americans that his hard-charging leadership style is ultimately going to be good for them and for the country. 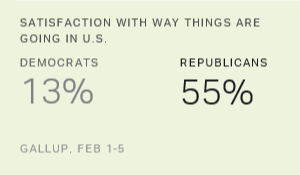 Republicans' satisfaction with the way things are going in the U.S. is up sharply in February, rising to 55% from 22% in January. Democrats' satisfaction dropped from 27% to 13%.