WASHINGTON, D.C. -- At the outset of the Trump administration, Americans' desire for a strong U.S. role in solving international problems is about the same as when President Barack Obama first took office. Nearly one in four Americans (23%) currently think the U.S. should play the leading role in world affairs, while 49% believe the country should play a major role. Support for the U.S. playing the leading role was slightly lower at the beginning of the George W. Bush administration, but support for a major role was higher. In addition to inauguration years, Americans' opinions about how active the U.S. should be in global affairs have been relatively stable throughout this century. Support for the leading role peaked at 26% in the two years after the 9/11 attacks. Combined support for the leading or a major role has generally been consistent since 2001 at about three-quarters of Americans.

Young Adults and Independents Most Skeptical About U.S. Role

The desire for the U.S. to play only a limited role in world affairs is highest among young adults. Nearly four in 10 of those aged 18 to 34 (38%) want the U.S. to play a minor role or no role in international affairs. Among those aged 35 and older, the figure is 22%. While this general age pattern was also evident at the outset of the G.W. Bush and Obama administrations, skepticism about the country's global role among younger adults is higher today than in the past. Support for a limited role was 25% among younger adults when Obama became president and 31% when G.W. Bush took office.

The views of younger adults, who are more likely than older Americans to identify as independents, likely contribute to greater skepticism among independents regarding the U.S. role in global affairs. A third of independents (32%) support a minor role or no role for the country in world affairs, compared with 23% of Republicans and 21% of Democrats. That pattern was about the same at the beginning of the Obama and G.W. Bush administrations. More broadly, in a highly polarized and partisan environment, this measure continues to be one of the few that Gallup tracks to show only minor differences in outlook between Republicans and Democrats.

In his inaugural address, Donald Trump argued that his "America First" approach offered a new vision for the nation's foreign policy. He vowed that his policies on trade, immigration and foreign affairs would prioritize benefits to American families and workers above all else. While this stance does not necessarily preclude the U.S. from playing a strong role in global affairs, the change in tone from the new administration has not had much effect on how Americans view the country's place on the global stage. Throughout this century, the view that the U.S. should either lead or play a major role in international affairs has remained solid.

The latest data suggest greater skepticism about U.S. prominence in international affairs among younger adults. Their heightened desire for the U.S. to move more into the background on global issues may reflect that this group came of age in a post-9/11 era of protracted U.S. military interventions in Iraq and Afghanistan. Given ongoing conflict and violence in the Middle East, younger adults may be questioning the utility of more interventionist U.S. policies in helping to solve the world's problems. 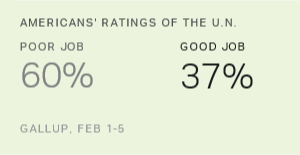 Americans' views of the United Nations are unchanged, but Republicans' and Democrats' opinions have diverged sharply in recent years.