WASHINGTON, D.C. -- A landmark year in 2016 for global warming politics has further deepened the already formidable divide between Republicans and Democrats on the issue. Two-thirds (66%) of Democrats say they worry about global warming a great deal, compared with 18% of Republicans. The 66% of Democrats worrying a great deal about the issue is the highest percentage in Gallup's annual polling on the question since at least 2000 and is nine percentage points above last year's previous high of 57%. Forty-five percent of independents now say they worry a great deal, a jump of 11 points from 2016. The rise in concern among both Democrats and independents has pushed the overall percentage of Americans saying they worry about global warming to 45% -- the highest level in nearly three decades of Gallup polling. Republicans' 18% who say they worry a great deal is the same as last year's percentage and 11 points below the party's high of 29% in 2000.

The widening gap between Republicans and Democrats comes after a year that highlighted vast differences between the parties on global warming issues. In April 2016, the United States joined 195 other countries in signing the Paris Agreement on climate change -- the most comprehensive international agreement to date on combatting global warming. It had been a long-standing goal of Democratic President Barack Obama, who said of the day the agreement was signed: "History may well judge it as a turning point for our planet."

But in November, only four days after the agreement went into effect, Republican Donald Trump was elected president on a campaign that included a vow to cancel U.S. involvement in the treaty.

Concern About Other Major Issues Less Affected by Partisan Differences

The glaring contrast in the percentages who are worried a great deal about global warming -- an overwhelming majority of Democrats on one side and fewer than one in five Republicans on the other -- resulted in a gap of 48 percentage points, notably larger than the partisan gap on five other environmental problems measured by Gallup and on all but one ("quality of the environment") of 13 other national problems asked elsewhere in the same poll. Even on such partisan issues as race relations and illegal immigration, the percentages of Republicans and Democrats who worry a great deal are within 30 points of each other.

Neither Party Unified on All Global Warming Issues

While the differences between Republicans and Democrats are stark on global warming issues, both parties are not unified within themselves on all aspects of global warming.

Despite their greater concern about global warming or climate change, 41% of Democrats do not expect global warming to ever be a threat to them or their way of life in their lifetime. And, in spite of Republicans' lack of concern about global warming, many acknowledge that increases in Earth's temperatures are occurring, and human activities may be the cause. Forty percent of Republicans believe that increases in Earth's temperatures are due more to the effects of pollution caused by humans, and 57% believe that natural changes in the environment are the cause.

In general, Democrats are much more likely to agree on the seriousness of the global warming problem than Republicans are to be skeptical about it.

Even in the highly partisan atmosphere of politics today, global warming stands out as an issue where little common ground exists between the two parties. This is perhaps best illustrated by the contrast in attitudes between Obama, who has described global warming as the greatest threat to future generations, and Trump, who has called it "a hoax."

Although there are different levels of concern about the issue by age, gender, income and race, all are much smaller than those based on political party preference. With Trump already taking steps to undo the Obama administration's actions against global warming, it seems unlikely that the divide between the parties will narrow any time soon.

Historical data for these questions are available in Gallup Analytics. 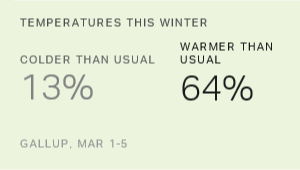 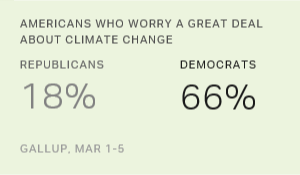