skip to main content
Economy
U.S. Consumer Spending Up in April, at $107

WASHINGTON, D.C. -- Americans' daily self-reports of spending averaged $107 in April, up $7 from March. The April figure is the highest monthly spending average since May 2008, although not meaningfully different from December's $105. April's $107 is the ninth daily spending average of at least $100 that Gallup has recorded for any given month during nine years of tracking the metric, and the third consecutive such reading in 2017. Americans had spent at this level in the first half of 2008, before the global financial crisis that occurred that fall. It took eight years for spending to reach a three-digit average again: Americans reported spending $100 or more in July and December 2016.

The April average is based on more than 14,000 interviews conducted as part of Gallup Daily tracking throughout the month. Gallup asks Americans each night to report how much they spent the previous day, excluding spending on normal household bills and major purchases such as a home or car. The measure gives an indication of discretionary spending.

From 2009 through 2014 -- in the immediate years after the 2008 financial crisis -- consumers' self-reported daily spending in April was relatively flat compared with March. Since then, April's spending averages have been slightly higher -- by at least $5 -- than March averages, as was the case in 2008. The latest $7 bump in spending is the largest March-to-April increase Gallup has recorded.

Spending in April was relatively robust among both higher- and lower-income earners, and was similar to what they spent during the holiday spending frenzy in December -- which has consistently been the highest spending month each year since 2009.

Daily spending reports among Americans living in households with annual incomes of $90,000 or more averaged $170 in April, matching their high for the past year in December. Meanwhile, national adults with annual household incomes of less than $90,000 averaged $81 in daily spending, about as much as they reported spending during the holiday season. Though retail sales sagged in the first quarter of 2017, April could be a turning point. According to the National Retail Federation, Americans were projected to break a record for spending on Easter this year, which gels with their self-reports of greater spending in April.

It's difficult to anticipate whether these gains will hold in May, which has a mixed history in Gallup's trend. While May spending has sometimes been substantially higher than April spending, it has just as often dipped or remained flat.

Americans' attitudes about spending remain mixed overall. They report that they are the type of people who enjoy saving rather than spending, and most say they are watching their spending closely. At the same time, their reports of the actual amount they spend have been rising. Americans remain upbeat on several of Gallup's economic measures, including their confidence in the economy and their assessments of their own standard of living. The months ahead will indicate how much renewed optimism about the economy and the public's underlying caution about spending will interact in terms of influencing their actual spending behavior.

Results for this Gallup poll are based on telephone interviews conducted April 1-30, 2017, on the Gallup U.S. Daily survey, with a random sample of 14,713 adults, aged 18 and older, living in all 50 U.S. states and the District of Columbia. The margin of error for the spending mean is ±$5. All reported margins of sampling error include computed design effects for weighting. 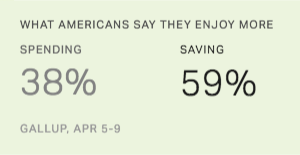 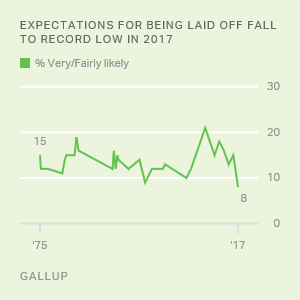 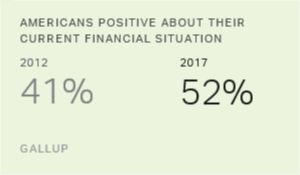