WASHINGTON, D.C. -- Americans are less worried about eight specific financial issues than they were last year, with concerns about some issues falling to their lowest levels in a decade or more. U.S. adults are most concerned about not having enough money for retirement and not being able to pay medical costs of a serious illness or accident, with 54% saying they are "very" or "moderately" worried about each. These two concerns have typically been the most worrisome issues for Americans since Gallup began asking about the collection of eight financial worries in 2001.

Gallup has asked Americans how concerned they are about a series of financial issues every April since 2001 as part of its annual Economy and Personal Finance survey. In 2007, Gallup introduced a question concerning worry about being able to pay for a child's college education. The latest data were collected April 5-9.

The largest decreases in financial worry since last year -- by 10 or 11 percentage points -- were in Americans' concerns about maintaining their standard of living, not having enough money for retirement and not having enough money to pay their normal monthly bills. Worries about these issues, as well as concerns about not being able to pay housing costs, are at their lowest levels since 2007 or earlier.

The percentages of U.S. adults who are concerned about not being able to pay their rent, mortgage or other housing costs (down by eight points) and not having enough money to pay for unexpected medical costs (down by six points) also significantly declined. The poll finds slight, though not statistically significant, decreases in worry about the remaining three financial matters.

The breakdown of each income group's changes from 2016 to 2017 can be found at the end of the article.

Republicans have had much more optimistic views since Donald Trump won the presidency. Positivity among Republicans has extended to their personal lives, with members of the party reporting much less worry about financial issues than they did during Barack Obama's tenure as a Democratic president.

Since last year, Republicans' worries declined the most in terms of maintaining their standard of living and having enough money for retirement -- both falling by 20 percentage points or more.

Democrats' levels of worry have not changed on most issues since last year. The one exception is concern about having enough money for housing costs, which dipped by 12 points.

As a result of these changes, Democrats are now more worried than Republicans about all eight issues, as opposed to last year, when the highest levels of concern over these issues shifted between the two parties.

A closer examination of the data suggests that much of the partisan movement since last year is occurring among lower- and middle-income households. Upper-income Americans, regardless of party affiliation, show little change in their level of worry compared with last year.

The economy has improved between April 2016 and April 2017 -- including a decline in the national unemployment rate of more than half a percentage point.

These improvements may be easing Americans' worry about their personal financial situations, but the larger political shift in the country is likely also a factor. Republicans, whose party now controls Congress and the White House, are likely more optimistic that Washington's economic policies will be favorable for them personally. One of Republican leaders' greatest challenges -- which could determine whether they retain their power -- is improving economic conditions so that even Democrats feel some relief in their financial worries.

Despite the national decreases in worry, such relief isn't being felt at the bottom. Not only are majorities of Americans who earn less than $30,000 worried about most of the issues Gallup polls on, but they are also about as worried in 2017 as they were last year, suggesting that improving conditions are not being felt at all income levels. 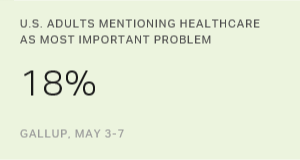