WASHINGTON, D.C. -- Americans remained marginally positive about the economy last week, with the weekly average of Gallup's U.S. Economic Confidence Index at +4. This is similar to the +2 the index hit the week before last, a post-election low. Major U.S. stock market indexes declined by nearly 2% last Wednesday, marking the largest one-day loss since September 2016. Analysts said the drop reflected the concerns of many stock traders and financiers that the Trump administration will be too clouded by scandal to pursue its market-friendly economic agenda. While stock market changes can influence consumer confidence, there was no obvious evidence of that last week, perhaps because the indexes recovered slightly in the following two days.

Americans' confidence in the economy remains notably lower than where it stood in earlier parts of the year. In particular, after the inauguration of Donald Trump in late January, the index climbed to +14 as Republicans' attitudes on the economy continued to improve. The index also recorded a nine-year high of +16 the week of Feb. 27-March 5, when Trump spoke extensively about his economic agenda in a prime-time address to Congress and the stock market hit all-time highs.

The index has not been able to sustain this optimism and has fallen closer to the "neutral" level. Nonetheless, assessments remain positive, which was seldom the case from 2008 until the week after last year's presidential election.

For the week ending May 21, 34% of Americans assessed the economy as "excellent" or "good," while 22% said it was "poor." Overall, the current conditions component averaged +12 for the week, up four points from the previous week.

However, slightly more Americans said the economy was "getting worse" (49%) rather than "getting better" (45%) last week. Consequently, the outlook component was -4, unchanged from the previous week. At a time when the news regularly suggests that politically, the country is in uncharted waters, it wouldn't necessarily be surprising if the turmoil exacted a toll on Americans' confidence in the economy. After all, last week's events were enough to rattle U.S. financial markets, at least momentarily.

Americans remain slightly more positive than negative about the economy, largely because they think current economic conditions are good. Their outlook for the economy has become less positive in recent weeks, perhaps because they -- like many on Wall Street -- may have increasing doubts about whether the Trump administration can deliver on its promises of economic growth, decreased regulation and tax reform.

Results for this Gallup poll are based on telephone interviews conducted May 15-21, 2017, on the Gallup U.S. Daily survey, with a random sample of 3,545 adults, aged 18 and older, living in all 50 U.S. states and the District of Columbia. For results based on the total sample of national adults, the margin of sampling error is ±2 percentage points at the 95% confidence level. All reported margins of sampling error include computed design effects for weighting. 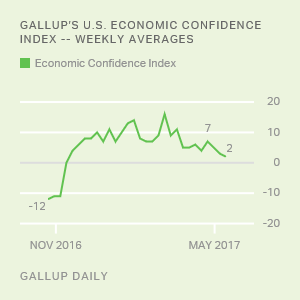 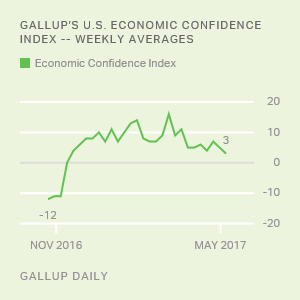