WASHINGTON, D.C. -- Americans' confidence in the economy remains slightly positive, with Gallup's U.S. Economic Confidence Index registering +3 for the week ending May 28. The index has ranged from +2 to +4 throughout May. Despite being positive, Americans' confidence in the economy is lower than it was after a post-election boost from December to March when the index regularly yielded scores of +10 and above. A stock market downturn in late March shook Americans' confidence, and the index has remained below +10 since. Still, the recent confidence levels are well above the largely negative ratings that Gallup recorded from 2008 through 2016.

For the week ending May 28, one in three Americans (33%) assessed the economy as "excellent" or "good," while 22% said it was "poor," resulting in a score of +11 for the current conditions component -- similar to the previous week's +12. This component has been fairly stable in 2017, registering double-digit scores in nearly all weeks so far this year.

Meanwhile, half of Americans (50%) said the economy is "getting worse," and 44% said it is "getting better," producing an economic outlook score of -6. Though not meaningfully different from the -4 recorded in the previous three weeks, the latest score is the lowest for this component since November's election. The economic outlook score has gradually dipped since a record high of +15 in March. Americans' confidence in the economy remains below the peaks seen throughout President Donald Trump's early months in office and has varied little throughout May.

The public's confidence in the economy often has been stable for prolonged stretches of time in Gallup's tracking and appears to have settled at a point barely in positive territory for now. Americans remain upbeat about the current state of the economy -- likely because of low unemployment, healthy stock values and relatively low gas prices -- but are slightly negative about the economy's outlook.

Results for this Gallup poll are based on telephone interviews conducted May 22-28, 2017, on the Gallup U.S. Daily survey, with a random sample of 3,524 adults, aged 18 and older, living in all 50 U.S. states and the District of Columbia. For results based on the total sample of national adults, the margin of sampling error is ±2 percentage points at the 95% confidence level. All reported margins of sampling error include computed design effects for weighting. 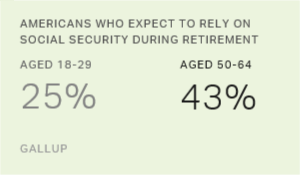 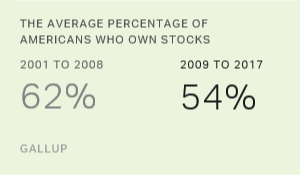 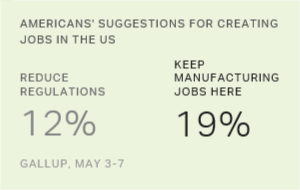