WASHINGTON, D.C. -- More than three in four U.S. investors (78%) are confident they will be able to maintain the lifestyle they want throughout their retirement, a nine-percentage-point bump from August 2014.

The hike in investors' optimism about retirement finances in the 2017 first-quarter Wells Fargo/Gallup Investor and Retirement Optimism Index survey likely fed off growing optimism about the investment climate in the U.S., with the index reaching its highest level since 2000. The survey interviews U.S. investors with $10,000 or more invested in stocks, bonds or mutual funds.

Investors who are already retired are more likely to be confident about their ability to maintain their retirement lifestyle (87%) than are nonretired investors (74%). Among the factors likely creating the disparity: Individuals who are confident they have enough money to retire are more likely to be able to do so than those who lack that confidence. Additionally, those who have already retired benefit from the hindsight of not seeing their standard of living get worse, likely boosting their continued confidence.

Investors' increased optimism about their retirement finances mirrors the results of a Gallup poll conducted in April that included noninvestors as well as investors. That poll found an increase in the percentage of nonretirees who think they will have enough money to live comfortably when they retire.

A separate question in the current investor survey finds that 36% of investors say they are worried they will outlive their retirement savings -- a 10-point drop from the 46% who said they were worried in August 2014. Among those who are worried, 5% say they are "very" worried and 31% say "somewhat" worried.

More than three in four U.S. investors are confident that they will be able to afford the kind of lifestyle they want throughout their retirement. Confidence climbs even higher among those who have amassed $100,000 or more in investments.

The increased confidence coincides with growing optimism among U.S. investors about the national economy and, to a lesser extent, their personal finances. The stock market's continuing ascent to record-breaking heights this year has been a major source of increased optimism for investors, many of whom have seen their net worth grow stronger as a result.

These circumstances have helped boost the percentage of investors who are confident that they'll have sufficient financial resources to maintain the lifestyle they want throughout their retirement -- and that they'll not run out of money during their golden years. In August 2014, 46% felt they were on solid enough financial ground to not worry about running out of money in retirement and to be confident they could maintain their lifestyle. Now, a majority of investors (56%) find themselves in that enviable position. 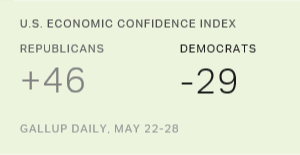 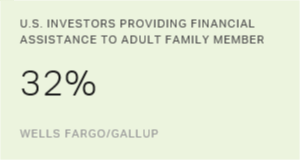 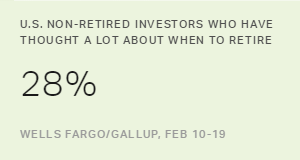