WASHINGTON, D.C. -- Americans who drink alcohol continue to say they most often choose beer (40%) over wine (30%) and liquor (26%). Beer has typically been the preferred alcoholic beverage in Gallup's trend. The latest results are from a July 5-9 update of Gallup's annual Consumption Habits poll. Gallup has found that beer is most popular among men; this year, 62% of male drinkers say they prefer beer, compared with 19% of female drinkers. Less-educated and middle-income Americans also tend to choose beer.

For the past two decades, at least three in 10 drinkers have said they prefer wine, peaking at 39% in 2005. Wine was slightly less popular in the early to mid-1990s. Women are significantly more likely than men to prefer wine, at 50% vs. 11%, respectively. This beverage is also preferred more among college-educated adults.

The 26% of drinkers who name liquor as their beverage of choice is the highest in Gallup's 25-year trend, but similar to the 24% recorded in 2004. The percentage naming liquor has typically been closer to 20%. Future measurements will help determine whether the current figure marks the beginning of a trend toward an increased preference for liquor.

The majority of American adults consume alcohol at least occasionally, with the current 62% figure nearly matching the 63% historical average in Gallup's trend dating back to 1939. The percentage of Americans who drink has been fairly steady over nearly eight decades, with a few exceptions. The drinking percentage held near 70% in the late 1970s and early 1980s. The figure dipped below 60% at several points between the 1930s and 1950s, as well as in select polls from 1989 to 1996.

Meanwhile, 38% of U.S. adults totally abstain from alcohol. That figure has remained below 40% since 1997. Americans are about as likely to consume alcohol as they have been for the past eight decades. Many of the Founding Fathers enjoyed beer, and it remains the most popular alcoholic beverage in the U.S. today. The brewing industry has seen tremendous growth in recent decades. Americans have thousands of breweries to choose from in 2017, compared with fewer than 100 in the early 1980s.

According to the Distilled Spirits Council of the United States, spirits increased their market share in 2016 compared with 2000, which may reflect the slightly increased preference for liquor in this year's poll. Continued tracking of Americans' consumption will determine if this is a momentary fad or a turn toward a greater preference for liquor over wine and beer. 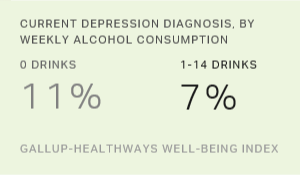