skip to main content
World
No Recovery Yet for Spain's Poor

LONDON -- Recent economic news from Spain has been mostly good, with employment gains accompanying respectable GDP growth of close to 3% in the past few quarters. However, new Gallup data suggest not all Spaniards are feeling this improvement. In fact, in 2017, low-income Spaniards split sharply from the rest of the country's population on key quality-of-life perceptions. In 2017, 44% of Spaniards in the poorest 20% of the population say they are satisfied with their current standard of living, the lowest figure among this group since Gallup began tracking this in 2009. Among Spaniards in all other income groups, at least three-fourths currently say they are satisfied with their standard of living.

The Spanish economy has struggled to regain its footing since the country's housing market collapsed amid the global financial crisis in 2008. Like several of its neighbors in southern Europe, Spain suffered a budget crisis in the ensuing years that forced the government to raise taxes and cut public spending. However, the country's poorest residents may be hardest hit by those austerity measures. In 2017, 35% of those in the bottom income group say they have had trouble paying for food in the past year; this figure is below 10% among Spaniards in other income groups. The growing differences between low-income and high-income Spaniards are a troubling reflection of the rising inequality that has accompanied the weak economic recovery in many European countries. The OECD's most recent update on income inequality noted that it remains at "historical highs" in many member countries and has increased most substantially since 2007 in Estonia, Spain, Sweden and Slovakia.

Thus far, Spain has not been party to the rise of far-right isolationist politicians elsewhere in Europe. Analysts have noted that the nationalist appeals driving support for those figures in some countries is less appealing to Spaniards, who are wary of such rhetoric after it was used to suppress democracy under the Franco regime.

However, to the extent that rising inequality creates a sense among the poor that they are cut off from economic opportunities, the country could see greater division along social fault lines that may be exploited by leftist movements. The left-wing coalition Unidos Podemos has already altered the landscape of Spanish politics with its strong showing in the June 2016 general election, tapping into an undercurrent of resentment against the dominant parties and opposition to the austerity measures backed by Prime Minister Mariano Rajoy.

Results are based on telephone interviews conducted with 1,000 adults aged 15 and older in Spain from March 13-April 6, 2017. For results based on the total sample of national adults, the margin of sampling error is ±3.9 percentage points at the 95% confidence level. All reported margins of sampling error include computed design effects for weighting. 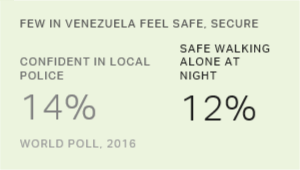