WASHINGTON, D.C. -- Americans remained mixed about the economy last week, with Gallup's U.S. Economic Confidence Index averaging +2 for the week ending Sept. 10. This marks the third week in a row that the index has hovered near zero, the index's neutral point. In contrast, confidence climbed as high as +11 in mid-August. In recent weeks, Americans have been less likely to express optimism about the economy than was the case in early to mid-August, when a booming stock market and positive economic news sparked a temporary rally. However, the current level of economic confidence is in line with most of the index's weekly estimates since April. As such, the decline in economic confidence the past three weeks mostly reflects a return to attitudes just before the early August rally.

Americans' generally positive ratings of the economy's current health are essentially offset by their more pessimistic outlook about the nation's future economic course.

For the week ending Sept. 10, 34% of Americans described economic conditions as "excellent" or "good," while 21% rated conditions as "poor." As a result, the current conditions component stood at +13, on par with the prior week's +12.

Americans are less positive in their assessments of whether the economy is improving. By 52% to 42%, U.S. adults say economic conditions are "getting worse" rather than "getting better." As a result, the economic outlook component was -10 for the week. This weekly score, while only slightly worse than the previous reading of -6, is technically the measure's worst weekly estimate since late October 2016. While the weekly score of the economic outlook component has generally been below that of the current conditions component for much of 2017, the gap between these two measures has widened since late July. In the last full week of that month, the current conditions component was 14 points higher than the economic outlook component (+9 and -5, respectively); last week, this difference was 24 points, a high for 2017.

After spiking briefly early last month, economic confidence has returned to the barely positive levels that were typical for much of the past five months. Americans, it would seem, are somewhat conflicted about the overall state of the economy -- the greater share of U.S. adults believe the current condition of the economy is good rather than bad but, at the same time, a majority of the country believes economic conditions in the economy are getting worse, not better.

There are likely many reasons for this growing divergence in current economic assessments and economic expectations, including the possibility that the two monstrous hurricanes that hit major U.S. states, like Texas and Florida, have caused some Americans to fear for the future of the U.S. economy. In particular, some experts have warned that Hurricane Harvey, which shut down a number of oil refineries when it hit Texas on Aug. 25, has already caused gas prices to rise in some parts of the country.

Results for this Gallup poll are based on telephone interviews conducted Sept. 4-10, 2017, on the Gallup U.S. Daily survey, with a random sample of 3,505 adults, aged 18 and older, living in all 50 U.S. states and the District of Columbia. For results based on the total sample of national adults, the margin of sampling error is ±2 percentage points at the 95% confidence level. All reported margins of sampling error include computed design effects for weighting. 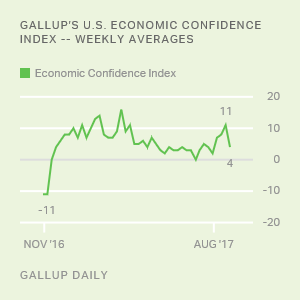 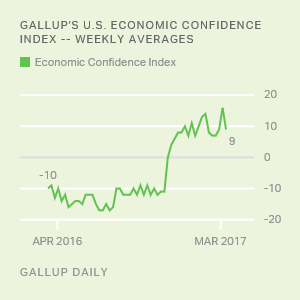 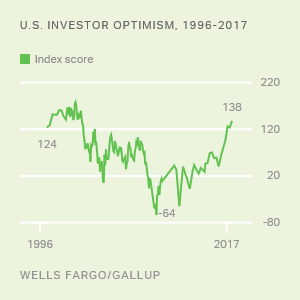 Optimism among U.S. investors rose again in the third quarter after plateauing in the second quarter and is now hitting levels not reached since 2000.