skip to main content
Economy
Confidence in U.S. Economy Dips to +4 in September

WASHINGTON, D.C. -- Americans' confidence in the economy declined slightly in September, with Gallup's U.S. Economic Confidence Index slipping to +4 from August's reading of +6. While Gallup's confidence index climbed past the +10 mark in the first month of the year, September's score of +4 represents a continuation of economic attitudes that have held since May, apart from a brief increase in early August after the Dow Jones industrial average hit 22,000.

The weekly average of Gallup's U.S. Economic Confidence Index remained in the low single digits for the week ending Oct. 1, averaging +2. This latest weekly reading is down slightly from +5 the week before. Even if Americans' overall confidence in the economy has stagnated recently, confidence nonetheless remains notably higher compared with any month between 2008 and November 2016. In particular, Americans' ratings of current economic conditions have remained at or near post-recession highs virtually all year, including last month. Moreover, the current conditions component has averaged +10 or higher every month this year, a level it had never hit in the nine years prior. The component was either positive or non-negative in only a handful of months during that period.

However, economic expectations dimmed slightly in September. Over the course of the month, half of Americans said economic conditions were "getting worse," while 44% said conditions were "getting better," resulting in an economic outlook score of -6. This is down four points from August's -2 outlook score -- but, as was the case with the overall metric, was no different from how this component performed in the final half of August. In the first half of August, by contrast, the economic outlook component was neutral, meaning it averaged a score of 0. While economic confidence faltered somewhat in September, it essentially reverted to the level seen consistently since May. The early August surge in confidence, fueled by the Dow Jones industrial average's 22,000 milestone, was ultimately a blip. Even though several major stock market indicators recorded new highs last week, economic confidence dipped slightly for the week, perhaps because the milestone levels get more media and public attention than the interim record highs.

Last week also saw Republicans in Congress introduce a framework to reduce taxes for many U.S. adults as well as corporations, while President Donald Trump began to publicly promote the plan. While it remains to be seen if this tax reform plan will be popular with the public, its passage could boost economic confidence. After all, economic confidence rose after the 2016 presidential election at least partly because many Americans believed that Trump's economic agenda would be good for the economy.

Results for this Gallup poll are based on telephone interviews conducted Sept. 4-Oct. 1, 2017, on the Gallup U.S. Daily survey, with a random sample of 14,030 adults, aged 18 and older, living in all 50 U.S. states and the District of Columbia. For results based on the total sample of national adults, the margin of sampling error is ±1 percentage point at the 95% confidence level. All reported margins of sampling error include computed design effects for weighting. 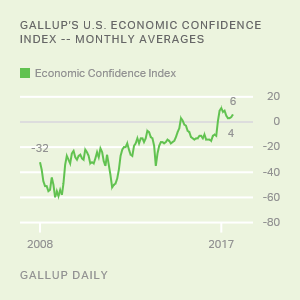 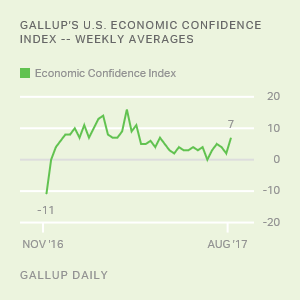