The latest result is from Gallup's annual Governance survey, conducted Sept. 6-10, and updates a question on the government's role in promoting traditional values first asked in 1993. In recent years, Americans have skewed toward thinking the government should remain neutral on values.

The erosion of support for governmental promotion of traditional values coincides with a recent Gallup finding that Americans have become increasingly liberal on a wide range of moral issues. Additionally, the percentage of Americans who describe themselves as liberal on social issues has nearly matched the percentage who say they are conservative, after many years of a significant conservative advantage.

The movement away from the long-held view that government should promote traditional societal values has been driven primarily by Democrats and political independents, while Republicans remain relatively steadfast in favoring governmental promotion of traditional values. In addition to Republicans, several subgroups of Americans are more likely than their counterparts to want the government to advance traditional values.

While older Americans and Christians typically skew Republican, women are more likely to be Democrats.

Americans' previously solid support for governmental advancement of traditional values has softened over the last few years. This has been driven by Democrats and independents, even as Republican support has remained firm.

While it is not clear exactly what respondents consider to be "traditional values" (the term is not defined in the survey question), the public's rejection of governmental promotion of them seems to track with a greater acceptance of a wide array of moral issues and an increasing tendency among Americans to identify themselves as socially liberal. 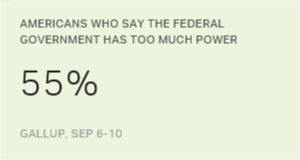