WASHINGTON, D.C. -- Americans' confidence in the economy was steady last week, holding at the highest level since mid-August and one of the highest levels in the past nine years. Gallup's U.S. Economic Confidence Index averaged +7 for the week ending Nov. 12. Amid a booming stock market and a falling unemployment rate, Gallup's U.S. Economic Confidence Index has now registered its strongest two-week performance since the second and third weeks of August, when confidence stood at +8 and +11, respectively. In particular, the October jobs report, which the Labor Department released on Nov. 3, showed the unemployment rate falling to a 17-year low.

Last week's score also ranks among the highest weekly readings since 2008, with only 14 other weeks registering a higher level of confidence. All 14 have occurred since Donald Trump won the 2016 presidential election. Before that event, economic confidence was negative throughout 2009-2016, save for a nine-week period at the beginning of 2015. Since then, the measure has been positive for all but two weeks.

While the overall level of confidence Americans have in the economy was unmoved last week, the two components of the index moved in opposite directions.

The current conditions component rose slightly last week to +18 from the previous week's reading of +14. Last week's score reflected 39% of Americans who described the economy as "excellent" or "good," while 21% described it as "poor." This score also ties for the highest level on record since Gallup began tracking economic confidence.

Meanwhile, the outlook component stood at -4 last week, compared with the previous reading of -1. The most recent average is the result of 45% of Americans saying the economy is "getting better" and 49% saying it is "getting worse." Americans' confidence in the U.S. economy remained strong last week, at least by the standards of the past nine years. This most recent rally may be a reaction to the recent tide of good economic news, including the positive October jobs report. And while major stock market indexes, such as the Dow Jones Industrial Average, registered their first weekly losses in nine weeks last week, they remain well above where they were one year ago.

Results for this Gallup poll are based on telephone interviews conducted Nov. 6-12, 2017, on the Gallup U.S. Daily survey, with a random sample of 1,503 adults, aged 18 and older, living in all 50 U.S. states and the District of Columbia. For results based on the total sample of national adults, the margin of sampling error is ±3 percentage points at the 95% confidence level. All reported margins of sampling error include computed design effects for weighting. 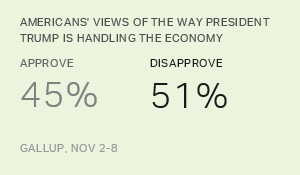 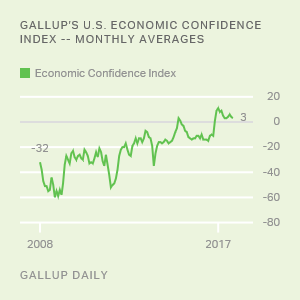