WASHINGTON, D.C. -- On the heels of President Donald Trump's recent declaration that the opioid crisis is a health emergency, Americans' mentions of drug and alcohol abuse as the most urgent national health problem have spiked. In November 2017, 14% of U.S. adults named it the most urgent health problem in the country, up from 3% a year ago. Current mentions of drug and alcohol abuse are by far the highest in Gallup's trend, dating back to the 1980s. With the latest increase in mentions of substance abuse, the issue now ranks near the top of the list of health problems considered to be the most urgent in the U.S. -- on par with healthcare costs (16%) but below access to healthcare (24%).

Mentions of drug and alcohol abuse in the Nov. 2-8 Gallup poll are more than double the previous high of 6% recorded in 1997, when use of methamphetamine, as well as "club drugs" such as ecstasy, were on the rise. Similar percentages of Americans named drug and alcohol abuse as the most urgent U.S. health problem in the late 1980s and early 1990s -- 4% in 1987 and 5% in 1991-- as many communities struggled to recover from the crack cocaine epidemic of the 1980s.

From 1999 to 2015, no more than 2% of Americans cited substance abuse as the nation's most urgent health problem.

Today, the opioid epidemic in the U.S. is a much larger problem than it once was. According to the Centers for Disease Control and Prevention, the number of overdose deaths involving opioids -- whether prescription opioids or heroin -- has quadrupled since 1999. The agency says that 91 Americans die from an opioid-related overdose each day.

As more Americans have become personally familiar with the problem in their own home or community, the epidemic has gained national attention. Candidates in the 2016 election debated how to combat the problem, and Trump's health emergency declaration furthered a promise he made on the campaign trail. However, the president's declaration has, so far, been absent of any requests for federal funding to help resolve the issue.

Substance Abuse as Most Urgent Health Issue Up Sharply Among Republicans

With Trump's emergency declaration, in addition to his frequent mentions of the issue in speeches, his party's base has also become more familiar with the epidemic of drug abuse.

One in four Republicans (25%) now name drug/alcohol abuse as the most urgent health problem facing the U.S., up from a mere 1% last year. Mentions of the issue are also up among certain demographic groups -- such as whites, men, and suburban and rural residents -- which lean Republican in party orientation.

However, this is not just a matter of Republicans following Trump's lead. Independents and Democrats, too, are showing more concern, although significantly lower than Republicans', with 11% of each party now naming drug/alcohol abuse, compared with 4% and 3%, respectively, last year.

Access to healthcare and the cost of healthcare remain the most urgent health problems, according to Americans. These issues have been the top two answers in each of Gallup's polls on the question since 2002, with double-digit percentages of Americans mentioning each issue for 16 polls in a row. Other issues that have ranked as the most urgent health problem in the past include AIDS, from 1987 through 1999, and bioterrorism in 2001, after anthrax attacks via U.S. mail that fall.

Cancer remains a constant in Americans' concerns about U.S. health problems. The 11% who currently mention it as the most pressing health issue is consistent with the 9% to 15% who have done so since 2003. Cancer garnered a greater percentage of mentions in the late 1990s and early 2000s before the percentages for access and cost dominated the list.

As communities across the country reel from the effect of the opioid crisis, the substance abuse issue garners great attention from the media and political leaders alike. About one in seven Americans now name the issue as more urgent than any other U.S. health matter.

Fighting the crisis will require an effort that includes multiple strategies, including curbing drug trafficking and providing addiction treatment.

With one in four Republicans naming drug and alcohol abuse as the most urgent health problem, Trump's emphasis on the opioid crisis fits with his base's high level of concern. However, his lack of any request for federal funding to help resolve the issue could jeopardize his ability to create effective solutions.

Pressure on the president is perhaps higher when it comes to the ongoing legislative debates about U.S. healthcare, which mostly address the public's concerns about issues of access and cost. 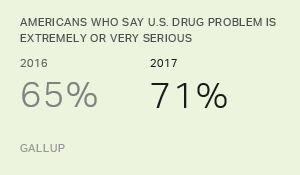 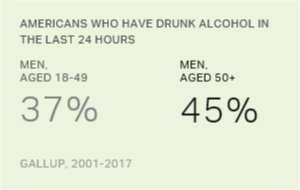