WASHINGTON, D.C. -- Americans' self-reported daily spending during Thanksgiving week averaged $115, similar to their $106 average during the same week a year ago. This year's figure is clearly on the high end of consumers' Thanksgiving-week spending over the past decade, which includes dips below $70 in 2009 and 2012.

The latest spending average is based on Gallup Daily tracking, reflecting spending that occurred from Sunday, Nov. 19 through Saturday, Nov. 25, including Black Friday. The question reads, "Next, we'd like you to think about your spending yesterday, not counting the purchase of a home, motor vehicle or your normal household bills. How much money did you spend or charge yesterday on all other types of purchases you may have made, such as at a store, restaurant, gas station, online or elsewhere?"

Although the Gallup spending measure captures gift purchases and holiday-related splurges, it is not purely a measure of holiday retail sales but of consumer spending generally. This overall spending metric provides some valuable context for spending estimates specific to particular retailers or types of spending that are released during the holiday season.

Still, as seen with spending for all of Thanksgiving week, this year's Black Friday weekend spending is on the high end of what Gallup has recorded each year since 2008. It is particularly high compared with the 2008-2009 recession and immediate post-recession years. U.S. retailers depend heavily on Black Friday sales -- so much so that stores are now offering Black Friday sales days earlier and extending them through the weekend, until the retail frenzy turns to "Cyber Monday." Preliminary industry estimates of consumers' online Black Friday purchases are encouraging, suggesting sales are up by double digits over 2016. However, it is still not clear how brick-and-mortar sales have been affected, or whether consumers are spending less on routine expenses so they can afford to splurge on too-good-to-pass-up holiday sales promotions.

The relative stability between 2016 and 2017 in Americans' self-reported daily spending over Thanksgiving week and Black Friday weekend suggests that consumers may, in fact, be cutting back on some types of spending to pay for others. However, with four weeks to go before Christmas, shoppers still have plenty of time to make good on their intention to spend a record amount on Christmas gifts this year. Those who didn't jump at the Black Friday sales may be holding out for even better deals as the season wears on. 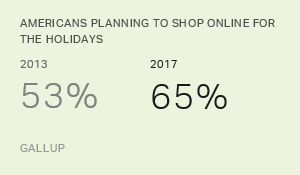 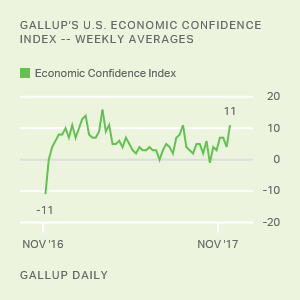 Confidence in the Economy Rises Over Thanksgiving Week