WASHINGTON, D.C. -- Majorities of Americans now rate the job performance of eight of 13 key government agencies as "excellent" or "good"; the U.S. Postal Service (USPS) again tops the list with a 74% positive rating. The Centers for Disease Control and Prevention (CDC) and the Secret Service trail the Postal Service as second and third on the list, respectively.

Most of the agencies received significantly higher ratings in 2017 than they did in 2014, when Gallup last asked about them. The Secret Service (+20 percentage points), the CDC (+16 points), the Department of Homeland Security (+11 points) and the Federal Reserve Board (+11 points) all saw double-digit improvements in their ratings in this latest update to Gallup's government agency job performance ratings, conducted Dec. 18-19.

The USPS, though at the top of the list in 2017, joins the Environmental Protection Agency (EPA), the Food and Drug Administration (FDA), and the FBI in not receiving significantly higher ratings this year than in 2014. The Department of Veterans Affairs (VA) (which Gallup refers to as the "Veterans Administration" for trending purposes) again receives the lowest rating, despite showing some improvement.

In 2014, the last time Gallup asked the government agency series, the FBI ranked second among all of the agencies, but it has fallen in the overall rankings as the positive ratings of others have risen. The FBI's excellent or good rating is currently unchanged at 58%.

Republicans' rosier outlook is part of a larger pattern in other Gallup research this year whereby GOP supporters are more positive than Democrats about the government and state of the country. In 2014, when Barack Obama was in the White House, majorities of Republicans rated only four of the 13 agencies positively, but this year, after their party recaptured the presidency, nine of the agencies receive majority positive ratings from Republicans.

In 2014, 62% of Republicans viewed the job the FBI was doing as "excellent" or "good," but that positive reading has fallen 13 points to 49% this year as tensions between the FBI and the Trump administration have escalated. As the FBI continues to investigate allegations that Russia interfered in the 2016 elections and whether the Trump campaign was involved, Donald Trump has become increasingly negative about the agency. Republicans appear to have absorbed that message. In contrast, Democrats rated the FBI higher by nine points this year than they three years ago.

While Democrats' ratings of government agencies have also changed, their shifts in opinion are less consistent and dramatic than Republicans'. Republican ratings of eight agencies improved by double digits, compared with three among Democrats. Echoing the pattern among all adults, Democrats rate the Postal Service highest at 78%, yet that is essentially unchanged from 2014.

In addition to the 20-point difference between Republicans' and Democrats' rating of the FBI, their ratings of three other agencies also differ by double digits. FEMA (21 points) and the Department of Homeland Security (17 points) are viewed more positively by Republicans, while the Postal Service (12 points) is rated better by Democrats. Five agencies are viewed about equally.

Americans have expressed increased levels of confidence in the economy and U.S. institutions in 2017, as well as higher levels of support for a more active government. This increased level of optimism and positivity is likely to have translated into the more positive views of the overall performance of government agencies that are evident in these poll results.

While the survey did not probe beyond these general ratings, the stabilization or even improvement in Democrats' results under a Republican administration may show that Democrats clearly differentiate between executive branch government operations and executive branch politics. Alternatively, it may show that Democrats also sympathize with government agencies or employees who serve under a Trump administration. This may be particularly apparent in the differing partisan views of the FBI, about which Trump has said, "Its reputation is in tatters."

Results for this Gallup poll are based on telephone interviews conducted Dec. 18-19, 2017, on the Gallup U.S. Daily survey, with a random sample of 1,011 adults, aged 18 and older, living in all 50 U.S. states and the District of Columbia. For results based on the total sample of national adults, the margin of sampling error is ±4 percentage points at the 95% confidence level. All reported margins of sampling error include computed design effects for weighting. 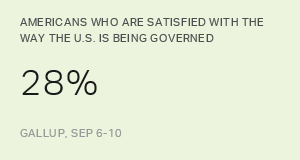 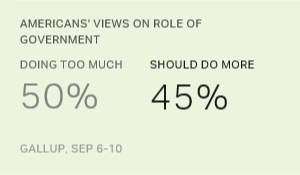 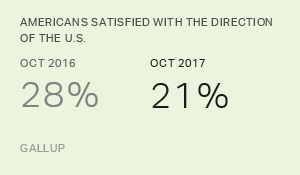