WASHINGTON, D.C. -- Sixty-two percent of Americans reported taking a vacation away from home in the past year, lower than what Gallup measured in 2001 but similar to what was recorded in 2005.

Gallup first asked Americans about their past year's travels using this question format in 2001, when seven in 10 reported having taken a vacation that year. When the question was next asked, in 2005, the figures were similar to what they are today.

Separately, about one in five Americans (21%) report having traveled internationally over the past year, a figure that has been stable compared with the 19% recorded in the prior two polls.

The latest figures are from a Dec. 4-11 Gallup poll, which also asked about Americans' intentions to take vacation time over the holidays. In contrast to the decline in the percentage of Americans who say they took a vacation in the past year, Americans were more likely this past December than in 2000 to say they planned to take vacation time over the holidays. The dissimilar trends may be due to the difference in question wording -- with one question asking Americans about their future vacation plans and the other asking them to report on their past vacations. It is also possible that holiday vacationing may have become more common even while people are vacationing less overall.

Employment status is a major factor in Americans' vacation habits. Nearly seven in 10 employed Americans (69%) reported having taken a vacation, while slightly more than half of those who are not employed (55%) reported having taken such trips. The percentage of employed adults who took a vacation in the past year is down slightly from the 74% recorded in 2001. Additionally, the U.S. employment-population ratios is about is lower than it was in 2001, according to the Bureau of Labor Statistics.

The decline in vacation-taking since 2001 recorded by Gallup aligns with research conducted by Oxford Economics, which found a sharp decline since 2000 in the average number of vacation days American workers were taking each year. The study has, however, found a slight uptick in vacation days taken between 2014 and 2016, so the trend could be changing course if this continues.

Taking a vacation is clearly related to Americans' socioeconomic status. More than four in five adults with annual household incomes of $75,000 or more say they took a vacation away from home over the past year (82%) -- a much greater percentage than Americans in the lower two income brackets took. Among Americans whose household income was less than $30,000, slightly more than a third (37%) reported having taken a vacation.

Four in five Americans who have college degrees reported having taken a vacation in the past year, compared with slightly more than half of those who are not college graduates (54%).

Though U.S. spending and sentiments about the economy improved in 2017, that didn't translate into more Americans taking vacations than in the past. This trend could be cause for concern given that Gallup has previously noted that Americans who take time for regular trips or vacations with family and friends have significantly greater well-being than those who do not - and the difference exists across all income groups. Additionally, Gallup has found that engaged employees report having taken slightly more vacation time in the past year than employees who are not engaged or who are actively disengaged.

The decline in vacation taking is in part due to the decrease in the percentage of Americans who are employed -- a group that is more likely to take trips away from home -- but vacation taking has waned among both employed and unemployed subgroups since 2001.

Some researchers detect a change in the trend of declining vacation time. This could be related to more options to work remotely during vacation, which, for many, allows them more vacation time overall.

About three in 10 U.S. workers report having not taken a vacation away from home in the past year. Employers might do well to examine how to encourage vacation time in a way that benefits their workforce's engagement as well as their employees' overall well-being, including such radical policies as having no vacation policies at all. 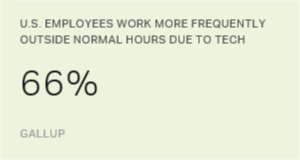 As the lines between work, remote work and vacation are blurring, traditional vacation policies may need to be revisited. 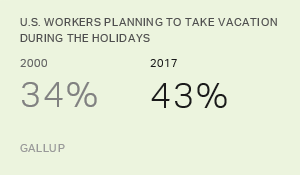 Most U.S. Employees Will Work, Stay in Touch Over the Holidays

More U.S. workers today than in 2000 plan to take vacation during the holiday season. Half of workers taking time off will check in with work while away. 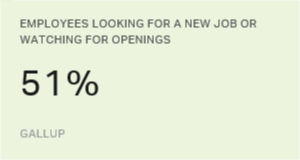