WASHINGTON, D.C. -- A majority of Americans continue to disapprove of the nation's new tax reform law after its late December passage, just as they did a month ago when it was still being debated.

Gallup assessed attitudes toward the tax bill in early December and found disapproval outweighing approval by almost 2 to 1: 56% vs. 29%. A month later, after Congress passed the bill and President Donald Trump signed it into law on Dec. 22, a new Gallup survey finds little substantive change. Approval has edged up four percentage points to 33% as the percentage with no opinion dropped by a similar amount, but these changes are not statistically significant.

Congress Approval Up Somewhat Among Republicans

Members of the Republican-led Congress have extolled the passage of the new tax bill, partly because it represents a demonstrable accomplishment in a year when the legislative body had been criticized for getting little done. But the bill remains unpopular, and there is little evidence to date of any resulting major change in the American public's views of Congress.

Congress' job approval is 20% in January -- not a significant shift from the 17% measured in early December before the bill's passage, although the past couple of months are up from the 2017 nadir of 13% recorded in October and November. The current reading roughly matches the monthly average for all of 2017 but is well below the 28% monthly high point last year, which was measured in February after Trump was inaugurated, giving the GOP control of the presidency and Congress.

As was the case for their views of the tax law, Republicans' positive views of Congress rose modestly in January, to 37% from December's 29%. The current approval rating among Republicans is the highest since readings of 50% and 43% in February and March of last year.

Congress approval among independents also increased, by six points in January, while Democrats' approval rating dropped two points to 9%, the lowest among that group since early 2014. The tax reform bill passed into law in December was among the most far-reaching pieces of legislation in decades -- and the signature accomplishment of Congress last year. But so far, there has been little overall change in Americans' majority disapproval of the law or in their views of Congress. The law's passage did appear to spark a modest improvement in Republicans' views of Congress, although it did nothing to affect the quite negative attitudes of Democrats. Similarly, Republicans' views of the law itself edged up from a month ago when it was still being debated, but a majority of all Americans continue to disapprove.

Trump and Republican leaders predict that public attitudes toward the law (and presumably toward Congress and the president) will improve once its monetary impact shows up in workers' paychecks in the months ahead. If there is any anticipation of that eventuality among Americans, it is not highly evident in the available data so far.

Results for this Gallup poll are based on telephone interviews conducted Jan. 2-7, 2018, with a random sample of 1,024 adults, aged 18 and older, living in all 50 U.S. states and the District of Columbia. For results based on the total sample of national adults, the margin of sampling error is ±4 percentage points at the 95% confidence level. For results based on the samples of Republicans, independents and Democrats, the margins of sampling error are between ± 6 and ±8 percentage points at the 95% confidence level. All reported margins of sampling error include computed design effects for weighting. 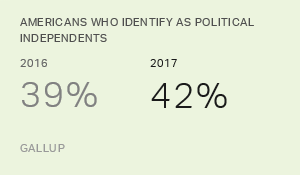 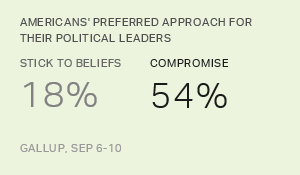 If Bipartisanship Marks 2018, Americans Would Be Happy

Government leaders are talking more about bipartisanship in 2018, a development that would fit well with what Americans want their government to do.