WASHINGTON, D.C. -- The gender gap in Donald Trump's 2016 victory over Hillary Clinton was the largest in election polling history, with significantly more men than women supporting Trump. This sizable gender difference has carried over to his job approval rating throughout the first year of his presidency. The average difference in Trump's approval rating between men and women was 12 percentage points in 2017, roughly double the differences for the three presidents who served immediately before him. Historically, women have been a core Democratic constituency, whereas men have been more likely to identify as Republicans, typically resulting in a gender difference in how men and women rate the sitting president. A recent Gallup analysis looking at Trump's job approval among demographic subgroups found that while gender differences are mostly attributable to the party identification of men and women, within each partisan group, men are slightly more likely than women to approve of Trump.

Thus, when assessing the gender gap for a given president, it is important to look how it compares with the gap for other presidents of the same party. Trump's 12-point gap compares with a seven-point lag in women's approval of George W. Bush in his first year and a six-point difference over the course of his presidency.

Clinton, Bush and Obama all left office with lower approval ratings than when they took office, but the gender gaps in their job approval remained fairly steady.

Trump's Approval Among Women Is Low and Steady

Trump had difficulty winning over women throughout his campaign, and not just because he was a Republican. In March 2016, Gallup found little to no gender gap in the favorable ratings of Trump's leading Republican contenders, compared with a substantial gap for him.

For her part, while Clinton was quite unpopular overall, her standing with women was much better than her opponent's. Mirroring this, there was, according to exit polling, a historically large gender gap in the vote preferences of men and women on Election Day, with men backing Trump (52%) in much higher numbers than women (41%).

Trump's weekly average job approval ratings in 2017 ranged from 40% to 51% among men and from 28% to 39% among women. Throughout the year, the gap in approval between men and women held relatively steady, with men supporting him at much higher levels. The day after Trump was sworn in, more than 2 million women protested against him in marches held all around the world. His first weekly approval rating was 39% among women (the highest of his term so far) and 50% among men.

Trump's first-year overall job approval rating was the lowest of any U.S. president in Gallup's polling history, and his support among women was particularly low. During his first year in office, Trump did little to help himself with women. Allegations of past sexual misconduct, including a videotape in which he spoke of women in vulgar terms that erupted in the final weeks of the campaign, continued to follow him, and policywise, he rolled back several actions the Obama administration had taken to aid women. These include a mandate requiring employers to provide free contraceptive coverage to female employees and a rule that aimed to achieve equal pay for men and women.

To kick off Trump's second year in office, women around the country once again rallied to protest him. His approval rating among women hovers around the 30% mark. With three years left in his term, Trump will have to make great policy strides if he hopes to end his presidency in similar standing to his predecessors. In the short term, he is not likely to be much help in rallying women to support Republicans in the upcoming midterm elections.

Results for this Gallup poll are based on telephone interviews conducted Jan. 20-Dec. 31, 2017, on the Gallup U.S. Daily survey, with a random sample of 171,474 adults, aged 18 and older, living in all 50 U.S. states and the District of Columbia. For results based on the total sample of national adults, the margin of sampling error is ±1 percentage point at the 95% confidence level. All reported margins of sampling error include computed design effects for weighting. 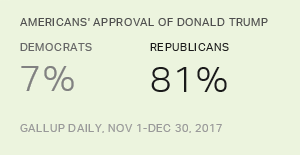 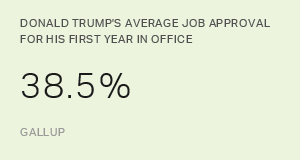 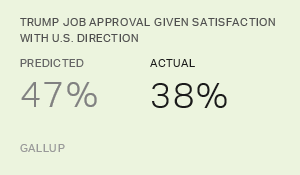