These data come from Gallup's annual World Affairs poll, conducted Feb 1-10, as U.S. tensions with North Korea and Russia garnered significant media attention and the Middle East conflict was not as widely covered

Despite Democrats and Republicans holding different views of Israel and the Palestinian Authority, both parties are equally likely (38%) to say the Israeli-Palestinian conflict poses a critical threat to American interests. For Democrats, this represents a modest six-percentage-point decline from 44% in 2016. However, among Republicans, this represents a 20-point decrease from the last time Gallup asked the question in 2016 and is the lowest in Gallup's trend.

Americans' support for a Palestinian state has varied over the years since Gallup first asked about it in 1994, reaching a high of 58% in 2003. Those who favor it have always outnumbered those who oppose it. Republicans and Democrats continue to hold opposing views on the issue. Fifty-eight percent of Democrats support the creation of an independent Palestinian state, little changed from 61% in 2017. Among Republicans, 38% support Palestinian statehood, up 13 points from 25% in 2017, though similar to previous levels, such as the 41% found in 2014.

Fewer Americans see the Israeli-Palestinian conflict as a critical threat to U.S interests than at any other time in Gallup's trend. Rather, more see it as an important but not critical threat. The overall decline in Americans' perceptions that it is a critical threat has been largely driven by Republicans. There are several possible reasons for the steep drop, including increased media attention on other threats and the Trump administration's efforts to create what he calls the "ultimate deal" for peace between Israel and the Palestinians. 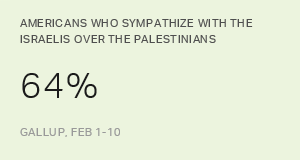 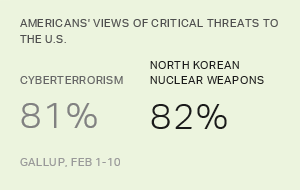 About four in five Americans believe that North Korean nuclear weapons and cyberterrorism each pose critical threats to the United States.