WASHINGTON, D.C. -- As the nation debates how to address the problem of gun violence in U.S. schools, more than one in five U.S. teachers (22%) say they have considered leaving their profession because of issues related to school safety. Still, most teachers remain satisfied with their profession and would make the same career choice again.

These results are from a nationally representative Gallup Panel survey of nearly 500 teachers who teach kindergarten through high school across the U.S., conducted March 5-12 -- just weeks after the shooting at a Parkland, Florida, high school. Among the findings are that four in 10 teachers say that their school is not well protected, most teachers are opposed to carrying guns in school, and that teachers prioritize gun control strategies including expanded background checks and assault weapons bans as the most effective strategies to prevent school shootings.

Despite concerns among some, more than eight in 10 U.S. teachers are "very" or "somewhat satisfied" with their overall experience in the teaching profession.

The 30% of teachers who report being very satisfied with the overall experience is similar to the percentage of teachers who are engaged in their jobs. Gallup finds that engaged workers are involved with, enthusiastic about, and committed to their work.

This is the first time this satisfaction question has been asked of teachers by Gallup, so it is not possible to know if their overall job satisfaction has fallen as a result of the school shootings. But teachers who are most worried about their safety at school are the least satisfied, suggesting that the shootings may be related to job satisfaction.

A different job satisfaction question asked by Gallup in August finds that 92% of all workers are completely or somewhat satisfied with their jobs, suggesting that teachers may be at least slightly less satisfied than the average American worker.

In the weeks following another school shooting, more than one in five teachers say the thought of leaving their profession has crossed their mind as a result of concerns over school safety. And, while the majority of U.S. teachers report satisfaction with their overall experience in the teaching profession, more than 15% are not satisfied and a quarter say they would not enter the teaching profession if they had it to do all over again.

There are many factors that impact job satisfaction, and a trend in teachers' satisfaction over the past few months is not available. Yet, in the weeks following another school shooting, teachers who worry most about school safety are the least satisfied with their jobs.

Results for this Gallup Panel survey are based on interviews conducted via a web survey March 5-12, 2018, with 497 U.S. teachers who teach kindergarten through high school. The teachers are members of Gallup's probability-based national panel. For results based on the total sample, the margin of sampling error is +/-7 percentage points at the 95% confidence level. All reported margins of sampling error include computed design effects for weighting. 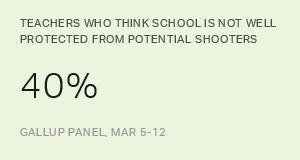 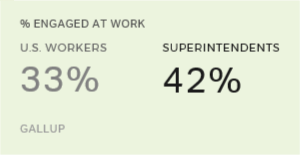