WASHINGTON, D.C. -- As the July 16 meeting between U.S. President Donald Trump and Russian President Vladimir Putin approaches, majorities of Republicans and Democrats continue to believe U.S.-Russia relations are more negative than positive -- defining the former Cold War foe as either an enemy or unfriendly to the U.S. However, the percentage of Republicans calling Russia a friend or ally is up sharply since 2014, from 22% to 40%. Meanwhile, Democrats' views of the relationship have changed little, with 25% today vs. 28% in 2014 defining it positively. These data come from a July 2-8 Gallup survey asking Americans about U.S. relations with each of 12 different countries. The survey was conducted during the ongoing special investigation into Russia's involvement in efforts to influence the 2016 presidential election and amid fears Russia is engaging in similar activity during the 2018 midterm elections. Trump has largely denied that there was any Russian interference in the 2016 election and has attempted to pursue a more conciliatory foreign policy with the country, even at the cost of relations with long-term U.S. allies. Trump is meeting with Putin in Finland.

Modest Change in Views of Russia Among All Americans Americans' views on U.S.-Russia relations generally trended positively from the first time Gallup asked about the issue in 1999 until 2006. Between 2006 and the next time Gallup asked about Americans' views of relations with Russia, in 2013, opinions began a negative slide. This increasing negativity was likely attributable to hostile actions the Russian government took in targeting neighboring countries perceived as friendly to the U.S. These include the 2008 war with Georgia, the 2014 annexation of Crimea and the country's ongoing involvement in the conflict in Ukraine. The negative slide in Americans' perceptions of U.S. relations with Russia had continued until this most recent reading.

Trump has consistently expressed his desire for warmer relations with Russia, and Americans' attitudes toward the country have become modestly more positive since 2014. That increase in positivity is largely the result of improved views of the country among his party's supporters. Should Trump's meeting with Putin have a positive outcome, in the form of an agreement on Syria or another area of contention between the two powers, it is likely that attitudes among Republicans and Americans overall toward Russia will improve.

However, it is unlikely Trump will be able to shift Democrats' attitudes on Russia. Considerable controversy still surrounds the president over allegations he colluded with agents of the Russian government as part of their efforts to interfere with the 2016 presidential election. These allegations are the basis of a lawsuit filed by the Democratic National Committee earlier this year. Even if the ongoing special counsel investigation exploring Russian interference in the 2016 election were to completely exonerate Trump and Russia, it is unlikely the president's critics would improve their opinion of either. This ongoing controversy will likely limit the extent of any improvement in Americans' perceptions of relations with Russia. 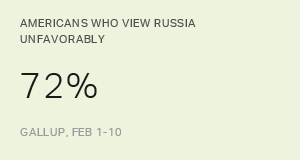